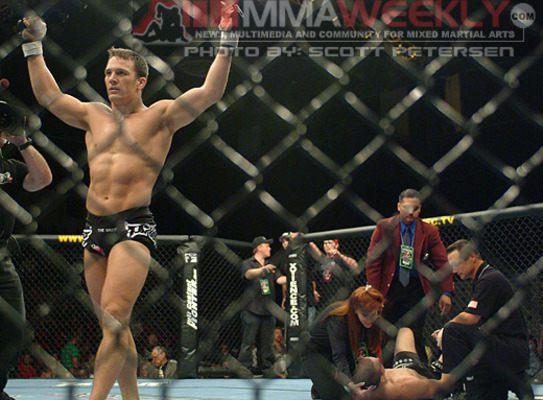 Drew Fickett is ineligible for regional rankings due to inactivity.
Fighters must have at least one completed MMA bout in the past two years to be ranked.

One of the most well-known fighters in the world to other fighters, if not necessarily to fans, Drew “The Master” Fickett seemed well on his way to earning his catchy nickname prior to joining the UFC in 2005. He had notched 24 victories, including wins over Kenny Florian, Fabio Holanda, and Dennis Hallman, amidst just two defeats.

Fickett picked up more quality wins over future stars such as Josh Koscheck, Josh Neer, and Kurt Pellegrino during his stint with the promotion. But he slumped following his UFC career, losing to men that arguably had no business being in the cage with him while going 0-5 in 2009. Fickett righted the ship in 2010 and 2011, assembling a nice streak of victories in the Shine Fights and MFC promotions.

When on the top of his game, Fickett is one of the most aggressive and savvy submission specialists in the sport. Even more impressive is that Fickett submitted some of the most accomplished ground fighters in his division without any formal Jiu-Jitsu training.