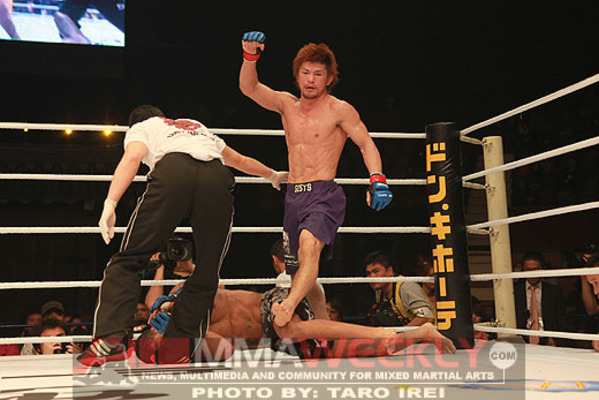 Michihiro Omigawa is a Japanese mixed martial arts fighter born on December 19, 1975 in Ibaraki Prefecture, Japan. Omigawa began his martial trains in elementary school, when as a kid, Omigawa began training in the art of judo. Omigawa also attended the Tsuchiuranichidai high school where Japanese MMA fighter Hayato "Mach" Sakurai who has a judo background and with Kazuyuki "Little Hercules" Miyata. Omigawa began training for MMA at the Yoshida Dojo with other judokas such as Kazuhiro "Kaz" Nakamura and Hidehiko Yoshida.

Omigawa is a seasoned well recognized veteran having competed in many big well known MMA promotions and having fought some tough competition there. He has fought in the PRIDE and UFC lightweight division and in the SRC, DREAM and UFC featherweight division.

In Omigawa's first UFC stint, he was released after losing 2 straight fights by unanimous decision against Matt Wiman and Thiago Tavares. He would pick up notable wins in other organizations over Hatsu Hioki, Cole Escovedo, Nam Phan, Marlon Sandro, and L.C. Davis. The UFC would take notice and sign Omigawa again but after going 1-4 he would again be cut from the organization.

After being released from the UFC, Omigawa would return to Japan to compete at DREAM 18. On December 31, 2012, Omigawa faced Tatsuya Kawajiri and would go on to lose the fight via unanimous decision. Omigawa's losing streak would continue after this bout, as he went on to drop his fourth straight fight on June 22, 2013, when he lost a unanimous decision to Bae Yong Kwon at Road FC 12.

Omigawa's fortunes would take a turn for the better in his next fight, however, as he recorded a win via armbar over Peter Cepeda at DEEP: 68 Impact on August 23, 2014. This victory broke Omigawa's four fight losing streak and gave "MIchi" his first win in over two and a half years.

Outside of mixed martial fighting, Omigawa has competed in various judo tournaments where he has won medals in such as the 2001 Asian Judo Championships in Ulaanbaatar  where he won a silver medal in the 66kg class and in the 2002 Asian Games in Busan where he obtained a bronze meal in the 66kg class.

John De Jesus is 31 today! Send him a Tweet.