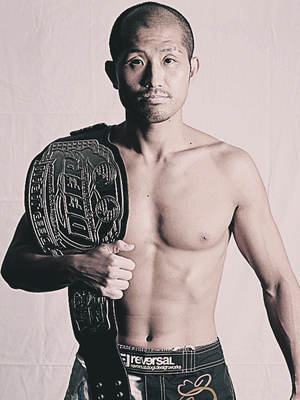 Kazunori Yokota is ineligible for regional rankings due to inactivity.
Fighters must have at least one completed MMA bout in the past two years to be ranked.

Kazunori Yokota is a Japanese MMA fighter who was born on April 3, 1978 in Funabashi, Chiba, Japan. He has a background in Judo and trained with Team Grabaka for most of his career with notable training partners such as Akihiro Gono and Kazuo Misaki. Yokota debuted in MMA at GCM - Demolition 040919 on September 19, 2004 where he faced off against Keita Nakamura. After two rounds the fight resulted in a draw. In his third fight Yokota debuted for the Japanese promotion DEEP and went undefeated in his next eight fights (6W - 2D), winning the lightweight title against Nobuhiro Obiya at DEEP - 28 Impact until he suffered his first loss by knockout at the hands of Seung Hwan Bang, losing his title in the process.

After losing the DEEP lightweight title, Yokota moved on to fight regularly in Sengoku where he made it to the finals of the Sengoku lightweight grand prix losing to Satoru Kitaoka by unanimous decision. After losing to Kitaoka, Yokota went on a 3 fight winning streak in Sengoku defeating Leo Santos, Ryan Schultz and Eiji Mitsuoka.

After a loss to Jadamba Narantungalag at WVR Presents - Soul of Fight, Yokota dropped to featherweight and returned to DEEP where he won two fights in a row and earned a shot at the vacant DEEP Featherweight Championship against Hideki Kadowaki. Yokota defeated Kadoaki via unanimous decision and one again held a title in DEEP. After a win outside the organization, Yokota returned to defend his title on February 16, 2013 at DEEP - 61 Impact where he defetaed Shoji Maruyama via unanimous decision. Yokota next fought Eun Kyum Kim in a non title on June 15, 2013 at DEEP - Cage Impact 2013. He defeated Kim via submission in the first round.

Yokota's next fight was against Doo Ri Song, who was a replacement for Yokota's original opponent who was injured. The fight took place on November 24, 2013 at DEEP - Cage IMpact 2013. Yokota would go on to win the fight via KO in the second round.The win closed out a perfect 3-0 year for Yokota.

In his first fight of 2014, Yokota squared off against Katsunori Tsuda at DEEP - 68 Impact on April 29. Yokota would win the bout by unanimous decision, setting the trend for the rest of the year. He would then pick up two more victories in 2014. He would earn a kimura victory over Yusuke Kagiyama at DEEP - 68 Impact on August 23 and a unanimous decision over Isao Kobayashi at DEEP - Dream Impact 2014: Omisoka Special on December 31, 2014.

Yokota would start the new year off on the right foot as he won a unanimous decision over Juri Ohara at DEEP - Funabashi Bom-Ba-Ye 2015 on May 9, 2015, bringing his win streak to an impressive eleven straight victories.

Yokota would then increase his winning streak by winning his twelfth consecutive fight at DEEP - Cage Impact 2015, where he would defeat Kenjiro Takahashi by unanimous decision on August 29, 2015.