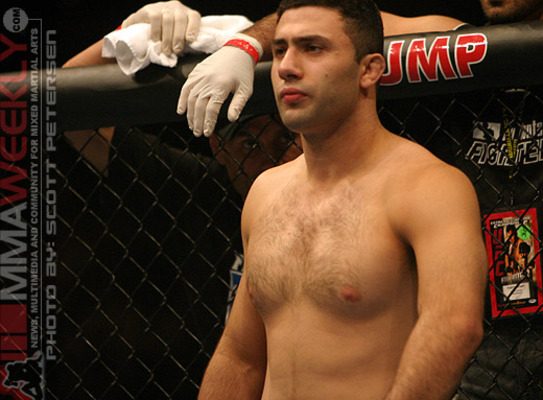 #55
Greatest MMA Grappler of All Time

Karo Parisyan is ineligible for regional rankings due to inactivity.
Fighters must have at least one completed MMA bout in the past two years to be ranked.

Prior to his professional MMA career, Karo “The Heat” Parisyan was a highly decorated Judoka, winning six Junior National belts and competing at the 2004 Olympic Judo trials. Parisyan began his professional MMA career in 1999 at the tender age of 17, winning six straight bouts before losing in back-to-back efforts to future UFC champion Sean Sherk in a minor promotion. Despite the setbacks to Sherk, who virtually never lost early in his career, Parisyan was widely viewed as a future top contender.

In 2003, Parisyan made his debut in the UFC, defeating Dave Strasser with a first-round Kimura. In his sophomore effort in the Octagon Parisyan lost a punishing decision to future welterweight kingpin Georges St. Pierre, spending much of the fight on his back. But Parisyan rebounded from the St. Pierre loss to go on the most notable winning streak of his career, defeating five straight opponents: Shonie Carter, Nick Diaz, Chris Lytle, Matt Serra, and Nick Thompson. Parisyan's next bout was a Fight of the Year candidate to Diego Sanchez in 2006; despite a losing effort "The Heat's" future seemed bright. He was regularly appearing in the UFC and many fighters preferred to avoid fighting him.

In 2008, however, Parisyan’s career began a downward spiral. He was knocked out for the first time ever against welterweight contender Thiago "Pitbull" Alves. Parisyan soon disclosed a crippling life struggle with panic attacks, and following his next bout against "The Stun Gun" Dong Hyun Kim, had a win overturned when he tested positive for prescription painkillers. After Parisyan pulled out of a scheduled bout with Dustin Hazelett at UFC 106 in November of 2009, a stunt he had pulled or threatened to pull more than once before, UFC President Dana White cut him from the promotion, claiming that he would never against set foot inside the Octagon. Parisyan is widely remembered for his classic bouts against Diaz and Sanchez and is still considered by many the best functional Judoka in MMA today.