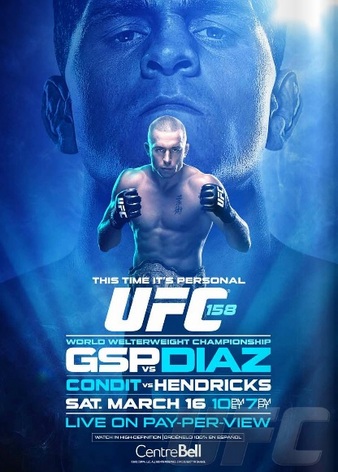 Tapology members can make predictions for upcoming MMA & Boxing fights. UFC 158 is closed for new predictions. 1,757 total members made predictions on this event, breaking down as follows below.

Leaderboard of the best predictions by member: UFC 158 Leaderboard

The main event is the climax of the rivalry between Georges St-Pierre and Nick Diaz. However, what at one time was perceived by many to potentially be one of MMA's biggest super-fights, the bout is now viewed by many as a chance for GSP to work off some more 'ring-rust' on the way to a bigger fight, considering Diaz lost in his last bout to Carlos Condit at UFC 143.

A rematch between Alessio Sakara and Patrick Côté, from UFC 154, was rumoured. However, Sakara was forced out of the bout due to renal stress.

Sean Pierson was expected to face Rick Story at the event.  But Pierson pulled out of the bout with an injury and was replaced by Quinn Mulhern.

Rory MacDonald was originally scheduled to face Carlos Condit in a rematch. But on February 18 MacDonald pulled out of the bout citing a back and neck injury. Condit will now face Johny Hendricks, who was pulled from his bout with Jake Ellenberger. Ellenberger will now face returning veteran Nate Marquardt.

Mitch Gagnon was expected to face Issei Tamura at the event. However, Gagnon was forced out of the bout with an injury and was replaced by T.J. Dillashaw.