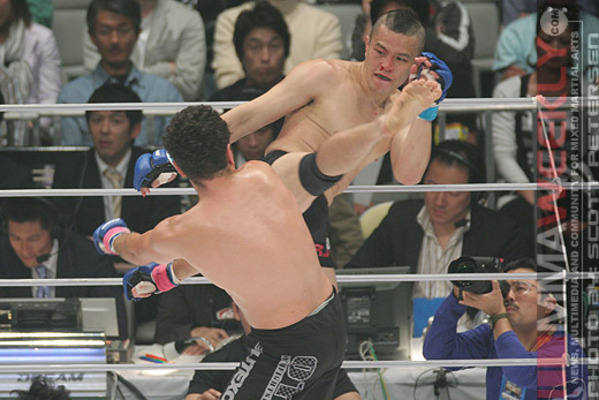 Katsuya Inoue is ineligible for regional rankings due to inactivity.
Fighters must have at least one completed MMA bout in the past two years to be ranked.

Inoue is a former Welterweight and current Lightweight fighter. He fought most of his career in Pancrase but has also fought in Dream. He holds notable victories over Takuya Wada, Satoru Kitaoka, Kyle Noke, Koji Oishi and Fabricio Nascimento.

Inoue would draw in his next bout against Mizuto Hirota at GCM - Cage Force EX on February 28, 2009.

Inoue would then compete at Pancrase - Changing Tour 4 against Maximo Blanco. Blanco would defeat his Japanese opponent via TKO in the second round.

The loss to Blanco would begin a losing streak for Inoue, who would go 1-3 over the next two years. Following his loss to the Venezuelan, Inoue would bounce back with a win over Katsuhiko Nagata at GCM - Cage Force 17 before dropping his next two bouts, a KO loss to Kota Okazawa at Pancrase - Impressive 4, and an armbar loss to Naoyuki Kotani at Pancrase - Impressive Tour 9.