Nick Diaz defeats Paul Daley via KO/TKO at 4:57 of Round 1 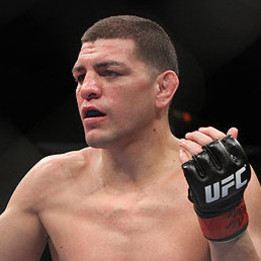 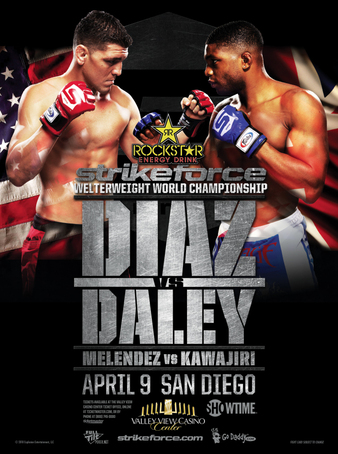 The Strikeforce Welterweight Title went on the line in the Main Event of Strikeforce's April 9, 2011 show when Champion Nick Diaz took on striking specialist Paul Daley.

A wild, back-and-forth affair began with Diaz on the receiving end of heavy shots from Daley that looked to have him wobbled. Diaz quickly turned the tide in his favor with heavy, winging body shots that mere moments later looked to have Daley fading. The furious pace kept up midway through the round as the fighters threw in wild combination exchanges. The pendulum next swung to Daley, who dropped Diaz flat on his belly with a heavy right hand. Diaz looked on the verge of losing as he turtled up low and looked to regain his senses.

Diaz eventually regained his composure and resumed his body attack on the feet, once again wobbling Daley in a wild barrage that had Daley stumble to the canvas as the fighters separated. Diaz quickly pounced and dropped shots while standing in Daley's guard. Only three seconds remained in the round, but referee par excellence "Big" John McCarthy saw Daley's eyes close and his body slacken and called a halt to the bout. An absolutely engrossing slugfest ended with Diaz securing his 10th straight win against world class competition, and the fans were handed an instant classic.