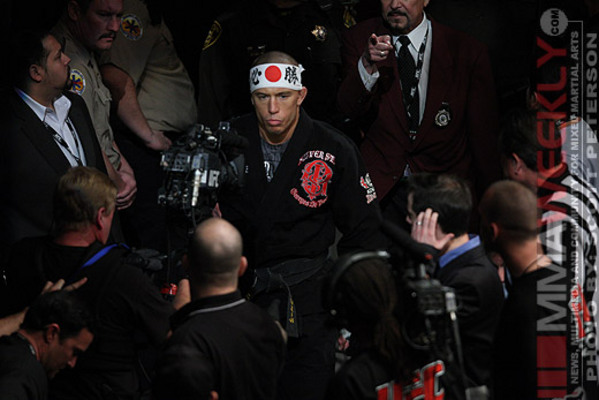 Georges St. Pierre is ineligible for regional rankings due to inactivity.
Fighters must have at least one completed MMA bout in the past two years to be ranked.

After competing in sport karate competitions at a young age, Georges St. Pierre began his professional mixed martial arts career in 2002, defeating notable fighters Ivan Menjivar and Pete Spratt, before debuting in the UFC in 2004 with wins over Karo Parisyan and Jay Hieron. He was then given a title match with former champion Matt Hughes for the vacant UFC Welterweight Championship. However, as St. Pierre claims, his nerves caught up to him and he overcommitted on a kimura attempt, that Hughes was able to counter into an armbar for a submission victory at 4:59 of the first round.

After putting together one of the most impressive winning streaks in welterweight history with consecutive demolitions of Jason “Mayhem” Miller, Frank Trigg, Sean Sherk, and BJ Penn, St. Pierre took the UFC Welterweight Championship from Matt Hughes at UFC 65 in 2006. Although he lost his first title defense to heavy underdog Matt Serra, St. Pierre rebounded by beating Josh Koscheck and then Matt Hughes for the interim championship. He then reclaimed the title in a rematch one year after losing it at UFC 83.

He is universally regarded as one of the top pound-for-pound fighters in the world, having dismantled many of the top fighters in the division since that time,  Josh Koscheck (again), Jon Fitch, Thiago Alves, Penn (for a second time), and Jake Shields. Unfortunately, GSP tore his ACL while training for his next fight, and did not compete for 19 months.

In UFC 154 St. Pierre squared off against interim welterweight champion, Carlos Condit to unify the belt. After being dealt a devastating head kick and flurry of punches in the third round, Georges came back to win a unanimous decision. He would then face Nick Diaz, whom St. Pierre has personally requested to fight, due to comments made by Diaz. At UFC 158 they would finally meet and GSP would use his wrestling to take down and frustrate Diaz en route to a Unanimous Decision victory.

When he first burst onto the scene, St. Pierre’s fighting style was an athletic blend of flashy striking and aggressive grappling. It was not until he refined his wrestling and Jiu-Jitsu skills, however, that he truly emerged as a world-beater. Although still considered a highly skilled striker, St. Pierre is now first and foremost known as the best functional wrestler in MMA, a truly stunning feat given that he had no amateur wrestling experience prior to entering professional fighting. St. Pierre is a relentless worker and a master strategist, often exploiting his opponent’s physiological weaknesses en route to victory. He is a humble fighter who openly and honestly discusses his mistakes in the Octagon, and who regularly travels the Americas in search of the best striking, grappling, wrestling, and MMA instruction. St. Pierre is regularly welcomed at a number of top teams in preparation for his title defenses, and carefully tailors his pre-fight camps to the opponent he is fighting. He is usually coached by Greg Jackson, besides the Condit fight, which Jackson did not participate in due to his relationship with both fighters.

In addition to his accomplishments inside of the cage, St. Pierre is one of the first true crossover stars to emerge from MMA, owing to an infectious natural exuberance, an Adonis-like physique, and a multi-year title reign. He is the first MMA fighter to be recognized as the Canadian Athlete of the year by Rogers Sportsnet (2008-2009), and the first fighter to be signed to sponsorship deals with sports advertising juggernauts Gatorade and Under Armour in 2009. Frequently describing himself as a "proud champion," St. Pierre is a consumate professional who takes seriously his obligations to the UFC, to MMA, and to the sponsors and fans that have made him rich and famous. He has received criticism for not finishing his opponents, his fights are often have some of the highest attendance marks for any UFC events.

Georges "Rush" St. Pierre  got that nickname by finishing his opponents in the first round early in his career.

GSP would face one of the toughest tests in his career when he fought Johny Hendricks at the main event of UFC 167. It was a very tough fight for the champion who looked like he had been through a war afterwords but he would edge out a close Split Decision.

After taking a month off to rest and heal up, St. Pierre announced his decision to Vacate his title and focus on his personal life for the foreseeable future. St. Pierre's abrupt departure was largely supported by fans, fighters and the UFC, since he had given himself to the sport for well over a decade. It is unknown whether or not St. Pierre will make an eventual return to the cage.

While the future of St. Pierre's fighting career is still up in the air, he has been keeping busy by exploring a different type of career that many other UFC fighters have done in the past - acting. St. Pierre starred in the Captain American squeal as Batroc the Leaper, a French-speaking kick boxer, mercenary. St. Pierre is also taking part in the pre-production work of a remake of the classic Kickboxer movie.

Watch UFC fighters give their thoughts on GSP's decision to Vacate his Welterweight Championship.

Affliction Clothing Company interviews Georges St. Pierre in this video. St. Pierre talks about his origins in MMA and his training habits.