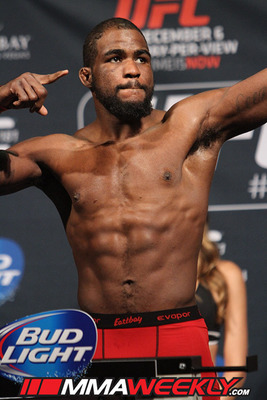 Fighting for a major organization has made Corey Anderson ineligible for regional rankings.

Corey Anderson was born on 22 September, 1989, in Rockford, Illinois, USA. Anderson began wrestling at a young age and showed no interest in MMA, until his final year of wrestling in college, where he met another notable MMA fighter and future ONE FC WW Champion - Ben Askren, who persuaded him to give it a shot. Anderson started his MMA training at Duke Roufus' gym, who is a well known Kickboxer and Mauy Thai instructors in North American.

Anderson only had 2 professional fights before making it onto The Ultimate Fighter 19 - making him by far the least experience fighter on the show. Anderson showed great athleticism on TUF, which he ultimately won in short fashion, when he knocked out Matt Van Buren at 61 seconds into the very first round.

Anderson's next challenger was against fellow UFC/MMA newcomer Justin Jones, at UFC 181. Anderson won the bout via Unanimous Decision. With this victory, Anderson remains undefeated in his short MMA career, 4-0.