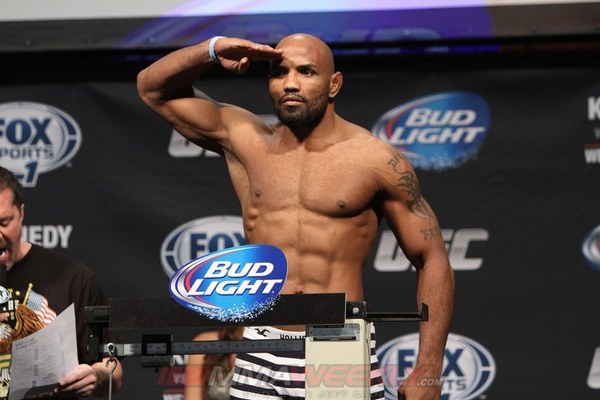 Fighting for a major organization has made Yoel Romero ineligible for regional rankings.

Yoel Romero is a Cuban fighter currently signed to Bellators light heavyweight division but has yet to make his promotional debut. He trains out of American Top Team in Coconut Creek, Florida. Romero is best known for earning a silver medal in freestyle wrestling at the 2000 summer games in Sydney Australia, representing his home country of Cuba.  Romero lost to Adam Saitiev in the finals. He has also medaled multiple times in the Freestyle Wrestling World Championships between 1998 and 2005, earning the gold medal in 1999.

Yoel's professional career began with four fights around Europe, all of which he won by T/KO. This earned him a spot in Strikeforce where he fought and lost to Rafael "Feijao" Cavalcante by TKO in the 2nd round. Romero would be signed to the UFC when Strikeforce was shuttered and he would make his UFC debut against Clifford Starks as part of the UFC on Fox 7 card. He would win in impressive fashion, finishing Starks in the first round with a beautiful flying knee landed and he finished him with punches. Romero would earn Knockout of the Night in his UFC debut. He took on Ronny Markes at UFC: Fight for the Troops 3 and was able to pick up yet another TKO, this time in the third round. He fought Derek Brunson at UFC Fight Night 35. After an exciting, back and forth fight, Romero was able to secure a TKO win with less than two minutes left in the fight. Both fighters were awarded the "Fight of the Night" bonus for their performance. Romero took on Brad Tavares at UFC on FOX 11 and defeated him by unanimous decision.

Romero then took on Tim Kennedy in a controversial fight where both fighters ended up cheating, Yoel Romero stayed on his stool for quite a while after the round started and Tim grabbed Yoels gloves which resulted in him almost finishing Romero at the end of the secound round, but in the end Romero managed to stop Kennedy by punches one minute into round 3. Romero then continued his win streak beating Lyoto Machida, Ronaldo Souza and Chris Weidman. This impressive 8 fight win streak earnt him a shot at the UFC interim middleweight title against fellow surging contender Robert Whittaker. They met at UFC 213: Romero vs. Whittaker, after a hard fought fight the pair went the distance and Robert Whittaker earnt the unanimous decision to become the UFC Interim middleweight champion. Following this defeat Romero got another shot at interim gold as he took on former middleweight champion Luke Rockhold. However this time Romero missed weight by 2 pounds and because of this the title was no longer on the table for Yoel who went on to KO Rockhold in round 3. Despite having missed weight, this win earnt Romero another shot at Whittaker who was now the Undisputed UFC Middleweight Champion. They would meet at UFC 225: Whittaker vs. Romero 2. This time Romero missed weight again coming in at 185.2 pounds, 0.2 over the limit for a title fight. This meant that the title was off the table for Romero. The fight was closely contested but the pair once again went the distance and in the end Whittaker came out on top of a controversial split decision.

With Romero now having lost two out of his last 3 fights he returned around a year after his second loss to Whittaker to take on rising contender Paulo Costa at UFC 241: Cormier vs. Miocic 2. After a highly entertaining fight that earnt Fight Of the Night Yoel Romero came up short in a close decision. The win over Romero put Costa next in line for a title shot after Robert Whittaker and Israel Adesanya was schedule to meet in a title unification bout the following month. Adesanya came up on top but Costa was unable to take the fight due to an injury. This lead to Yoel Romero getting the call and despite being on a two fight losing streak Romero would meet Israel Adesanya in the main event of  UFC 248: Adesanya vs. Romero. This time Romero made weight and so the title was on the line. Adesanya and Romero would go the distance in what is widely regarded as the worst UFC title fight since the 1996 Detroit Dance. Adesanya would pick up a highly controversial unanimous decision which many believe should have been a win for Romero. This would however mark a third straight loss for the 4 time UFC title challenger and after having a booked fight against Uriah Hall fall through he was subsequently released from the UFC on December 4th 2020.

On December 15th 2020 It was finally announced that Yoel Romero would be signing with Bellator. Moving up to the light heavyweight divison, It was announced that Romero would enter as a part of the Bellator Light Heavy Weight Grand Prix. His first opponent was scheduled to be Anthony Johnson however Romero ended up failing medicals due to an eye issue and was replaced by Jose Augusto Azevedo who after a close fight with Johnson got stopped in the second round.