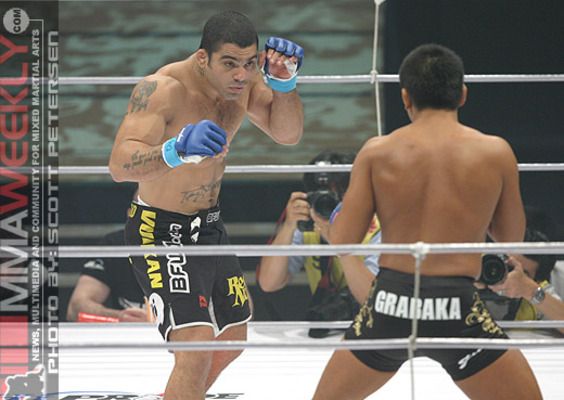 #70
Greatest MMA Grappler of All Time

Paulo Filho is ineligible for regional rankings due to inactivity.
Fighters must have at least one completed MMA bout in the past two years to be ranked.

After making his MMA debut in 2000, Filho reeled off 16 straight wins, defeating the likes of Ikuhisa Minowa, Yuki Kondo, Murilo Rua, Ryo Chonan and Kazuo Misaki along the way during his run in Pride FC and the WEC. At that time, the high point of his MMA career, Filho could be found on many top ten pound-for-pound lists and in some cases atop the middleweight rankings.

However, Filho has checked himself into substance abuse rehabilitation facilities on more than one occasion during his career, and the first loss of his professional career came in a bizarre rematch with American wrestler Chael Sonnen in 2008 during which Filho could be seen speaking to thin air en route to a Unanimous Decision loss in which both fighters were booed heavily.

Since the loss to Sonnen, Filho has managed to put together another winning streak, but he has become somewhat infamous for pulling out of bouts at the last minute and it is unclear whether he will regain his prior form. At his best, Filho combines explosive athleticism and a compact frame with a grappling game that is absolutely smothering.