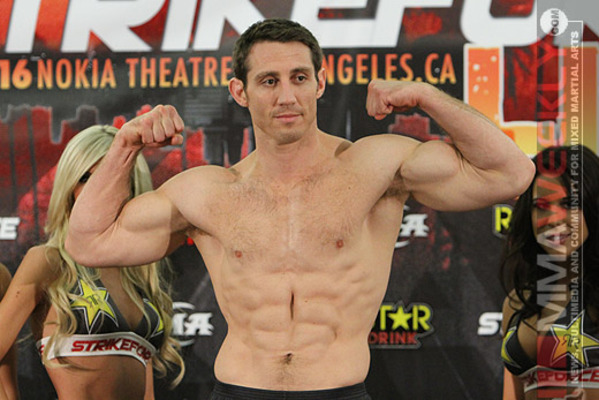 Tim Kennedy is ineligible for regional rankings due to inactivity.
Fighters must have at least one completed MMA bout in the past two years to be ranked.

Tim Kennedy is a middleweight fighter currently signed to the UFC. He holds black belts in Japanese Jui Jitsu as well as Modern Army Combatives. Of his seventeen wins, fourteen have been finishes including eight submissions. He has won the "Knockout of the Night" bonus one time.

Long underrated and underrecognized, Tim Kennedy is finally earning his rightful place as a top fighter in the minds of MMA fans. Since turning pro in 2001, Kennedy has turned in dominant performances in almost all of his appearances. Having launched his MMA career fighting out of The Pit -- home to longtime UFC Light Heavyweight Champion Chuck Liddell -- Kennedy is one of the only high level MMA fighters who has continued to serve full-time in the United States military during his professional career.

Serving as a sniper in the United States Army, Kennedy was awarded the Army's Bronze Star medal for valor under fire. He is currently a staff sergeant in the Army as well as a lead combatives instructor. When the Army introduced a combatives tournament, he won the light heavyweight division for three years in a row. After conceding that his military commitments had hampered his progress at the highest levels of mixed martial arts competition, Kennedy was graciously allowed by the military to train and compete full-time beginning in 2009.

Throughout his career, he has fought in a number of promotions including WEC, Strikeforce, IFL, ShoMMA and Extreme Challenge. He typically prefers to grapple but is more than willing to strike if necessary. He holds notable wins over Jason Miller, Trevor Prangley, Melvin Manhoef and Robbie Lawler. He lost his professional debut and since has only lost to top flight competition consisting of Jason Miller in a rematch, Ronaldo 'Jacare' Souza, Luke Rockhold and Yoel Romero. All of his most recent loses have been by decision. He squared off against Trevor Smith at Strikeforce's final event where he was able to pick up a third round submission victory. They were originally supposed to fight at Strikeforce: Cormier vs. Mir before the event was cancelled.

With the end of Strikeforce Kennedy signed with the UFC and would take on Roger Gracie at UFC 162 for his first test. He would cruise to a unanimous decision victory and also showed he was not afraid to grapple with Gracie in the process. He was next set to fight at the third installment of the UFC's 'Fight for the Troops' against Lyoto Machida in the main event. Machida was later rescheduled to an earlier card. This left Tim without an opponent so he took to twitter, mildly but playfully insulting a number of fighters in order to get someone to step into the fight. Rafael Natal eventually bit. Despite a slow start to the fight, Kennedy was able to knockout his opponent late in the first round which earned him the "Knockout of the Night" bonus. He would then take on Michael Bisping as the Main Event of UFC Fighter Brazil Finale. Kennedy would pick up his 3rd straight UFC win with a Unanimous Decision victory.  Tim was then matched with Yoel Romero at UFC 178.  He lost by TKO via punches in the third round.