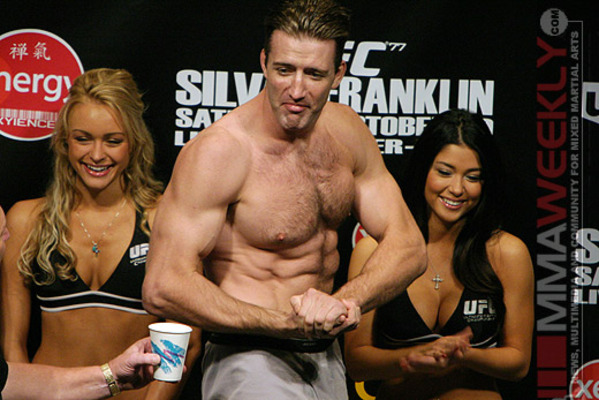 Stephan Bonnar is ineligible for regional rankings due to inactivity.
Fighters must have at least one completed MMA bout in the past two years to be ranked.

Although Stephan Bonnar was an accomplished mixed martial artist prior to his stint on the inaugural season of the hit Spike TV reality show The Ultimate Fighter—going 6-1 prior to joining the cast—his life and career were forever transformed by his role on the show. In the first-ever MMA fight card to be broadcast on live cable television, Bonnar and fellow Season 1 finalist Forrest Griffin put on one of the best fights of all time before the eyes of millions of American viewers, successfully demonstrating the mainstream appeal the sport would go on to generate in years to come. As word spread of the classic battle unfolding on cable TV, millions of people literally tuned in to watch the fight mid-sequence. It remains one of the most important moments in MMA history.

Episode 12 Bonnar def. Mike Swick by Triangle Armbar at 4:58 of Round 1

While Bonnar came out the loser of a razor-thin decision in that pivotal meeting, Dana White was sufficiently impressed to offer Bonnar a UFC fight contract along with Griffin. Since that time, Bonnar has continued to remain sharp in one of the most stacked divisions in the promotion, defeating the likes of James Irvin, Keith Jardine, Eric Schafer, and Krzysztof Soszynski in a blistering rematch.

A purple belt in Brazilian Jiu-Jitsu under the late Carlson Gracie, Bonnar usually elects to keep his fights standing and rely on his crisp, solid boxing base. He has one of the most steadfast chins in the division and has never been finished—aside from cuts—throughout his professional career.

Bonnar was riding a three fight win streak with victories over Krzysztof Soszynski, Kyle Kingsbury and Igor Pokrajac. Bonnar would fight Anderson Silva in his next match up but would lose by TKO in the first round after a vicious knee to the body dropped him. Following the loss Dana White announced that Bonnar was retiring from the sport. Shortly after, it was announced that Bonnar's UFC 153 post-fight drug test came up positive for Drostanolone, he would be suspended for a year but doesn't affect him much since he is likely retired now. He leaves the UFC with an 8-7 record and will forever be remembered for his epic fight with Griffin.

Following his release Bonnar would sign with Bellator and will face Tito Ortiz in the Main Event of Bellator 131. After a back and forth fight in which both fighters looked slow and sluggish, Ortiz defeated Bonnar via split decision. Following the decision, Oritz dumped out his water bottle on a shocked Bonnar in retaliation of Bonnar's pre-fight trash talk. A possible rematch is rumored but not confirmed.