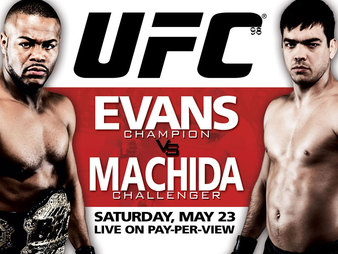 In an event that was wracked by a rash of injuries and withdrawals to its main card fighters, UFC 98, which was originally set to feature a main event pitting Heavyweight Champion Brock Lesnar against Frank Mir, then Light Heavyweight Champion Rashad Evans against Quinton Jackson, settled with a title showdown between Evans and undefeated contender Lyoto Machida.

In the main event, Machida stole the Light Heavyweight Championship with a second-round knockout, becoming the first fighter to defeat Evans in his professional career. In the co-main event, TUF 6 coaches and bitter rivals Matt Hughes and Matt Serra finally fought to a close Decision that Hughes won.