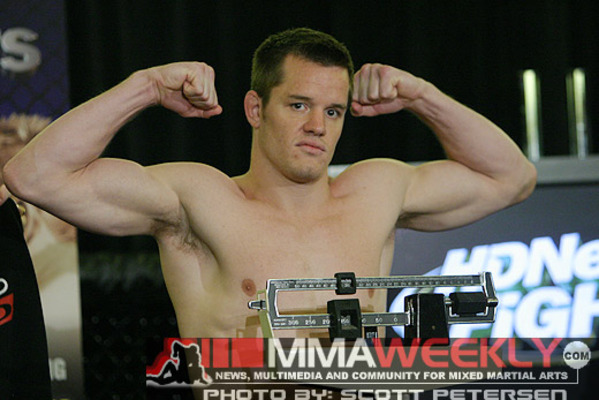 Fighting for a major organization has made C.B. Dollaway ineligible for regional rankings.

Prior to his mixed martial arts career, C.B. Dollaway had a lengthy run as a high school and collegiate wrestler, earning the title of All-American after placing fifth in 2006 for Arizona State University. After graduating from college, Dollaway entered professional mixed martial arts competition in 2006, winning his first six bouts before being submitted by Amir Sadollah in the finals of The Ultimate Fighter 7 middleweight tournament. Dollaway has not been a favorite among some fans, possibly stemming from his loss to Sadollah, in which he appeared to have tapped to an Armbar only to refute the claim after the fight was stopped.

After his stint in the Ultimate Fighter, Dollaway was given a UFC contract and fought Jesse Taylor at UFN 14 where he submitted Taylor by Peruvian Necktie in the 1st round.  Dollway would then win his next fight against Mike Massenzio by 1st round TKO. Dollway would suffer his 2nd UFC loss at UFC 100 where he was put to sleep by guillotine choke by Tom Lawlor. Dolloway would later rebound with back to back decision wins against Jay Silva at UFN 19 and Goran Reljic at UFC 110.

Dollaway looked to rebound at UFC on Versus 5 against Jared Hamman , who was making his middleweight debut. Again, Dollaway was put away by strikes, giving him back to back losses for the first time in his career. However, Dollaway was able to redeem himself with a decision win over Jason "Mayhem" Miller at UFC 146, beating Miller by unanimous decision. In his next fight, Dollaway would welcome former TUF Brazil finalist and UFC newcomer Daniel Sarafian at UFC on FX 7. He would win the fight by Split Decision and then drop his next fight to Tim Boetsch by Split Decision. He would bounce back with a first round TKO over Cezar Ferreira at UFC Fight Night 18 in Brazil making it his second underdog win down in Brazil.

Following his quick knockout win over Ferreira, Dollaway was then scheduled to face Francis Carmont at UFC Fight Night 41 in Germany. Coming in as a slight underdog once again, Dollaway would go on to earn a unanimous decision victory.

Having won 4 out of his last 5 (with the sole loss being controversial) Dollaway was awarded a fight against former UFC light heavyweight champion Lyoto Machida. The fight was scheduled  for UFC Fight Night 58. The fight ended with Machida earning a TKO 1:02 into the first round. Machida landed a liver kick that visibly hurt Dollaway very badly and MAchida would follow up with punches to get the victory.

Episode 8 Dolloway def. Nick Klein by Guillotine Choke at 2:41 of Round 2

Episode 12 Amir Sadollah def. Dolloway by Armbar at 2:50 in Round 3

The Ultimate Fighter 7 Finale Amir Sadollah def. Dolloway by Armbar at 3:02 of Round 1

*Due to Jesse Taylor being kicked off the show Dolloway and Credeur faced off to see who would take his place in the finale.