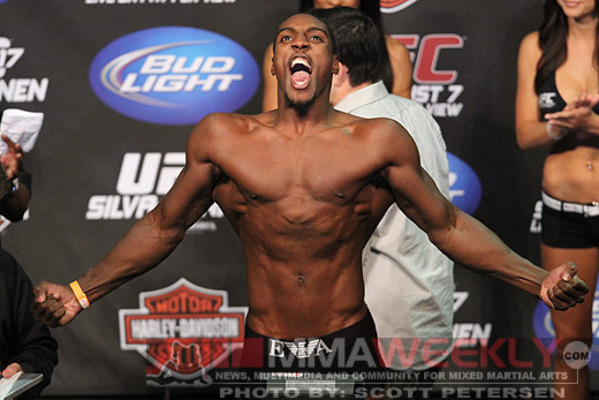 Fighting for a major organization has made Phil Davis ineligible for regional rankings.

An NCAA National Wrestling Champion for Penn State in 2008 and a 2009 No Gi World Jiu-Jitsu Champion in the blue belt, super heavyweight division, Phil Davis is one of the best wrestlers to make the transition to the world of professional mixed martial arts competition in years. Born on September 25th, 1984 in Harrisburg, PA, he combines a freakish physique with world-class grappling skills, he has already rattled off several quick victories in the ultra-competitive UFC light heavyweight division since joining the promotion in 2010. He holds notable victories over Brian Stann, the formerly undefeated Alexander Gustafsson, and Antonio Rogerio Nogueira.

Utilizing his height (6’2”), enormous physical strength, and wrestling pedigree, Davis has shot to the top of the light heavyweight division.  All but four of his professional fights have been inside the UFC's octagon. Although he primarily uses his wrestling inside the cage, he does have two t/ko victories before he signed with the UFC. Davis has won every fight in the UFC that he has been the oddsmakers favorite in. The only time he was the underdog was against Rashad Evans and he lost that fight via decision. Davis won his fight with Tim Boestch with a modified kimura that has since been dubbed the "Mr. Wonderful".

Davis was thrown into the spotlight when he faced Rashad Evans in the main event of UFC on Fox 2. Evans was promised a title shot against Jon jones if he won though the same was not offered to Davis. Evans went on to win via decision. This marked the first loss for Davis but also his biggest step up in competition.

His next fight was against undefeated Brazilian prospect Wagner Prado at UFC on Fox 4. Their fight quickly ended in a no contest when Davis inadvertently poked Prado in the eye which halted the action. The ringside doctor declared that Prado could not continue so the fight was declared a no contest. The rematch was set for UFC 153 and this time Davis was able to submit Prado in the second round with a Anaconda choke. His next win would come over jiu jitsu specialist Vinny Magalhaes at UFC 159. Davis played it smart and kept the fight standing and used his striking to earn the unanimous decision victory. He followed that win up with a unanimous decision over Lyoto Machida at UFC 163 in a very close and hard to score match. Many people felt that Machida should have got the nod but regardless Davis edged him out and moved up the rankings with the win. Unfortunately for Davis, his title shot hopes were set back after a decision loss to the returning Anthony Johnson where Phil displayed his toughness and chin.

Phil would bounce back with a win over the highly touted former title challenger, Glover Teixeira, at UFC 179 via unanimous decision.

Davis may have defeated Ryan Bader during their collegiate wrestling days, but Bader was the one victorious after their MMA showdown at UFC on FOX 14: Gustafsson vs. Johnson. It what was an underwhelming fight, the judges gave Bader the win via Split Decision.

The Bader fight was Davis' last fight under his current contract with the UFC and to most people's surprise he has not been resigned yet. Davis is still in the exclusive negotiating period with the UFC, but if the UFC does not sign Davis soon, it is a guarantee that he will receive enticing offers from other promotions, most notably Bellator.

The UFC put out this short vid on the origins of "Mr. Wonderful" Phil Davis's nickname shortly before his UFN 24 bout with Antonio Rogerio Nogueira in March 2011.