Jon Jones defeats Lyoto Machida via Submission at 4:26 of Round 2 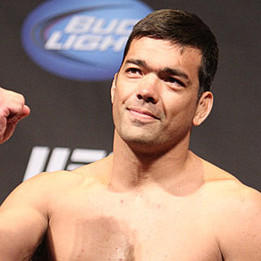 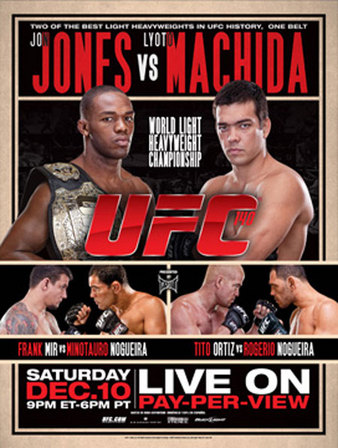 The second round saw the tense fight continue with each fighter throwing strikes from the outside. Both fighters landed good shots. Jones connected on a big right hand that caught Machida flush, and then a moment later he landed a takedown and planted Machida on his back. Jones threw an elbow that sliced Machida's forehead open immediately. Machida attempted to get to his feet and referee John McCarthy paused the fight to have the cut reviewed. The cut was wide but was quickly cleared by the doctor to continue. The fighters were restarted in the clinch, and they broke free with Jones missing on an elbow. On a subsequent exchange Jones landed heavily with a left that sent Machida to the ground. Machida popped up but was then stuck in a gruesome standing guillotine. Machida was put unconscious and as Jones let go of the choke, Machida crashed to the canvas.

The official end came at 4:26 of the second round due to the technical guillotine choke, in what was the biggest test of Jones's career but one that he passed skillfully.

"He did punch me pretty good, he didn't hurt me but he wobbled me a little bit, it proved to me that I can take a punch... he's just smart, his range, his tactics, he's a tough puzzle... I know Lyoto's a black belt so I was expecting a lot more movement on the bottom... it's not really a move that I practice [the choke] but it's something that I've got from wrestling all those years... I have a great team and great supporters around me and my biggest supporter is Jesus Christ."

I'll hold my peace, until he signs a contract RT @tuckerp1986: @Jonnybones What do you think of (cont) http://t.co/RWVOBfgc

Can't wait to play with these http://t.co/GR1E1v9y

Shout out to my man Hamed for hosting me in his beautiful home for the weekend http://t.co/4mqw3iat

Just hopped a flight to South Beach #Miami, should be there for the next two days or so

Lol oh really? RT @Yuan89rv: @TheRock the rock over jones anyday. But rock only wins because chuck norris is not on there

It's all #MMA to me bra RT @caetanoteles: @Jonnybones it's very cool your respect to brazil and our fighters. Keep on this way, champ.

Maybe one day RT @thesittuation: @Jonnybones so when we gonna see you AND your two beast brothers on ESPN??

Haha I loved it there, could've stayed all day. RT @Caleb_WVU: @Jonnybones Just watched you for the 3rd time today on ESPN!

They're not that bad, I'm messin RT @newyorkmetal1: @Jonnybones Nice and Yellow... Hahaha

Coach Herm Edwards should have his own reality show, dude has crazy energy http://t.co/edkHgM6G

That's funny, did I seem nervous? I felt fine RT @JayConJay: @Jonnybones nice segment on ESPN!!!! Were you nervous??

About to do a live chat on http://t.co/U6dh2T3p in the sportsnation section. Come join and ask questions

About to go live on sportscenter! @espn

About to go live on sportscenter! @espn

Now heading back to the hotel, busy day tomorrow RT @ajheintz316: Watching @Jonnybones give a great interview on @espn

Ay @chrisbrown did you get a chance to watch the fight?

Tune in to espn. I'm about to be on sportscenter!

Is there a mall in Bristol?

Sure! I land around 715 RT @mrcharismact: @Jonnybones wow right near my house..any chance I could bring my son 2 meet u ?

Just hopped a flight to #Connecticut will be doing live in studio interviews for ESPN all day tomorrow :)

I wont be fighting, Just wanted to attend the show.This will be my first time in brazil, I cant begin to tell you how excited I am

2 days and 29 minutes
after

2 days and 22 minutes
after

hey everyone, ESPN's Sportsnation nominated me as Awesomest Dude of the Year! You can vote at http://t.co/MA8YbQI4

UFC 140: Behind the Scenes with Jon Jones http://t.co/5woEvQRF

Hope you guys enjoyed my walkout song, big thanks to everyone who supports me. I love you and you're all beautiful.

7 hours and 43 minutes
after

7 hours and 34 minutes
after

7 hours and 11 minutes
after

4 hours and 59 minutes
after

4 hours and 59 minutes
after

4 hours and 46 minutes
after

4 hours and 16 minutes
after

2 hours and 43 minutes
after

2 hours and 11 minutes
after

2 hours and 4 minutes
after

1 hour and 33 minutes
after

2 hours and 41 minutes
before

3 hours and 23 minutes
before

5 hours and 30 minutes
before

5 hours and 35 minutes
before

6 hours and 3 minutes
before

6 hours and 27 minutes
before

6 hours and 57 minutes
before

13 hours and 3 minutes
before

Be sure to send me some of your favorite #motivational quotes, you guys aways come through with some pretty good ones. Thanks! Gnight :)

13 hours and 56 minutes
before

My walk out song will be dedicated 2 all my beautiful supporters around the world.. Proud to be you guys Champion. RT if Im talking to you

14 hours and 15 minutes
before

Up kind of late, Cant stop studying, good thing I get to sleep in as long as I want tomorrow.. only 4lbs over

Congratulations to @ChanJones99 for missing 5 games and still managing to make 1st team all big east this season! #monster

Long day of media but its all been fun. Now its time to finish out this weight cut.

Dragons shoot fire, I must be like water... "the way is to have no way" -Bruce Lee

Assessoria LM: Good evening TL. The Dragon is in Canada training for the next combat. Let's twist for him? #golyoto

show what's meant to be seen

3 days and 13 minutes
before

Lord I thank you

The test of character is having the ability to meet challenges. -Walter Annenberg

Thanks for the Birthday wishes guys

Absolutely, family first RT @Nickdavila: @Jonnybones any room in your diet for a small piece of birthday cake?

Will do RT @ChanJones99: @Jonnybones please give her a kiss for me and tell her uncle chan loves her!

#HappyBirthday to my now 2 year old baby girl Carmen, Cant wait to see her when she flys into Canada later tonight..

Thanks J, had to go get a workout in #Goodtimes RT @JeremyMSG: @Jonnybones good to meet you as you were leaving the garden! Muran blazer btw

Thanks for having me @arielhelwani

#607 RT @fieds7: @Jonnybones got a crew of UE tigers coming to Toronto this weekend! Get r done!

But I can't skate!! RT @chammer36: @Jonnybones You and Machida should duke it out on the ice. #Jerseyovertheheadanduppercut #hockey

RT @zackatlin: If @Jonnybones cheers for the #Rangers tonight, I guess I'm forced to cheer for lyoto next weekend at the #acc #TMLtalk

Ice skating looks mad fun, I gotta give it a try one of these days

I don't really follow #Hockey, who's going to win?

Getting ready to watch @thenyrangers play the #Toronto maple leafs at the Garden http://t.co/vdHvPjYe

5 days and 5 minutes
before

Lol RT @odell_jackson: @Jonnybones so was life pissed when you grabbed him by his balls?

Haha #swag RT @NiallBradley2: @Jonnybones did you get a pic of Ariel's shoes? :D lol http://t.co/pUb91hmC

Week of the fight I'm back on my made up #TigerBlood diet.. Nothing but sashimi and fresh vegetable (cont) http://t.co/7koOiyVW

It's true! RT @markcagehero: Be in a good mood because no one cares if your in a bad mood -@Jonnybones

Haha maybe I should've used better wording RT @Jason_MMA: Quote of the Week: "I grabbed life by the balls." - @JonnyBones

C u at 3 RT @SInow: UFC's youngest champ @Jonnybones will stop by our offices today. Reply to us with questions & we'll ask him the best!

thanks brother RT @muzbymm: @Jonnybones Great interview on O&A, man. You got a new fan.

Nothing but respect for @UrijahFaber for being a man of his word even tho those were half push-ups ;)

Assessoria LM: Missing 5 days for the next fight of Machida, who is with The Gragon gives RT #golyoto

Tuna salad for the flight http://t.co/r2OpVXAT

hey @Camilo_Q just wanted to let you know, I use to drum in church growing up and it was a real pleasure hearing you flow today.

6 days and 46 minutes
before

On the behalf of Sagebrush church in Albuquerque, Diego and I would like to wish you a Happy and (cont) http://t.co/AZZIVpMg

Heading to the gym to work hands with @Six_Gun_Gibson. Ttyl

Lol RT @ArnieSalmon: @jonnybones is a good man, stood up for me against all these crazy people. much respect

haha guys take it easy on @ArnieSalmon.. I think the kid was just voicing his opinion.

I'm 220lbs right now RT @Aaron_MMA: @Jonnybones how much do you weigh before you cut?

Don't get me started on that guy RT @CaioLeao_CRVG: @Jonnybones Maynard, who criticized you, he doesn't finish fights

Best man win RT @ConnorBurney: @Jonnybones who you got, mayhem or bisping?!

Moma needs new shoes RT @Sean__Fox: @Jonnybones He yanked on that arm like someone who loves his mother!

Come on D, you gotta relax

Whenever your ready buddy, no rush... I think the fans would prefer you do it sooner than later tho RT @UrijahFaber: @Jonnybones crap!

One more to go.. #LetsGoDiego

And that's really his only job. RT @MMATank: @Jonnybones quite entertaining to say the least

Hmmm, no RT @tom_breedon: @Jonnybones you thinking of trying out his post fight celebration?!

I won't get on him tonight RT @RazDude2002: @Jonnybones I look forward to fabers Vid!!

It's crazy how fast people judge a person they've never bet in person RT @lilxerin: @Jonnybones Good point, just not a fan of Dodson at all!

That's what makes this so interesting RT @lilxerin: @UrijahFaber @Jonnybones Not good to bet against TAM fighters either!!!!

Haha he's kind of a nerd but how could you not love the guy. He's a class act RT @UrijahFaber: @Jonnybones haha word! I love Jackson

looking like we got ourselves a bet @UrijahFaber! Tell TJ its nothing personal, It's just not wise to bet against @JacksonsMMA fighters ;)

Shout out to @CBKT for consistently having me in top shape for my competitions.. #505 #BEASTMODE

should we make a bet @UrijahFaber? Loser does 100 push ups in a row on video?

Assessoria LM: The Dragon will lead Brazil and Para to UFC140. All cheering with hashtag #golyoto

1 week and 56 minutes
before

"as we let our light shine, we unconsciously give other people permission to do the same" - Nelson Mandela.

Rise and shine everybody

Saying what's up to the female fighter of the year @MieshaTate.. http://t.co/gBtDLBHr

Assessoria LM: Suco no final do treino. / Juice at the end of training. http://t.co/QEv6NVLJ

Up and at the airport, 9am practice might be a tough one #sleepy

So grateful to be you guys fighter of the year, it's such a blessing and an honor. :)