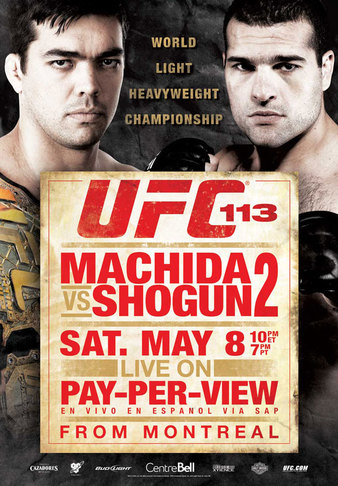 #66
Greatest Event of All Time

Tapology members can make predictions for upcoming MMA & Boxing fights. UFC 113 is closed for new predictions. 1 total members made predictions on this event, breaking down as follows below.

Leaderboard of the best predictions by member: UFC 113 Leaderboard

After one of the more controversial decisions in UFC history allowed Lyoto Machida to hold on to his UFC Light Heavyweight Championship belt and undefeated record in September of 2009, top contender Mauricio “Shogun” Rua got his chance at redemption just eight months later. An aggressive Rua made the most of his second chance, knocking the defending champion out cold in the first round and erasing all doubt as to the new king of the light heavyweight division. During the short fight, Shogun tore his ACL—a recurring injury throughout his career—which kept him sidelined until 2011.

The co-main event, a grudge match between trash-talking young lions Josh Koscheck and Paul Daley, delivered unwelcome fireworkds. After Koscheck dominated Daley with superior wrestling throughout the affair and insulted Daley at the close of the third round, Daley threw a punch at him after the bell. The result was Daley’s immediate and permanent expulsion from the promotion at the hands of an angry Dana White. For his win, Koscheck was granted a title shot and a coaching spot opposite Georges St-Pierre on Season 12 of The Ultimate Fighter.

Watch Lyoto Machida's father drink his own urine at UFC 113.

Watch the full video preview for the UFC 113 rematch of Mauricio "Shogun" Rua vs. Lyoto "The Dragon" Machida.

Watch the video highlight for the UFC 113 Lyoto Machida vs. Shogun Rua rematch.

MMA Live analyzes the fallout from UFC 113 in the first of two segments covering the fights, including UFC highlights and video analysis.