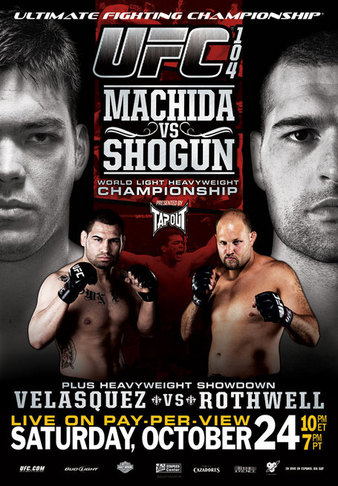 Tapology members can make predictions for upcoming MMA & Boxing fights. UFC 104 is closed for new predictions. 15 total members made predictions on this event, breaking down as follows below.

Leaderboard of the best predictions by member: UFC 104 Leaderboard

After dominating undefeated champion Rashad Evans in May, undefeated Light Heavyweight Champion Lyoto Machida looked to be unstoppable. In the main event of UFC 104, however, he met his match, as former Pride superstar Mauricio “Shogun” Rua went blow-for-blow with “The Dragon” for five close rounds before heading to a decision that many thought would go Rua’s way. Unfortunately for Rua, Machida was granted the Decision, drawing a venomous reaction from many fans. For his efforts, Shogun was granted an immediate rematch, which would take place in May of 2010, as well as a winner’s purse from UFC promoter Dana White.