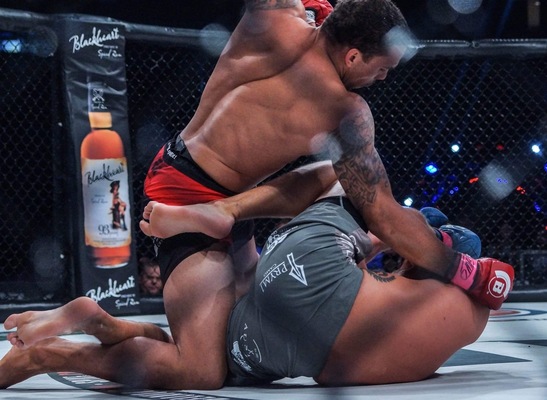 Fighting for a major organization has made Eryk Anders ineligible for regional rankings.

Eryk Anders (born April 21, 1987) is an American professional mixed martial artist currently competing in the Middleweight division for the UFC, and a former college football player for the Alabama Crimson Tide. Anders was born on a U.S. Air Force base in the Philippines, where his mother was stationed at the time. When Anders was a sophomore in high school he moved to San Antonio, Texas, where he played football for Smithson Valley High School. After graduating from Smithson Valley High School Anders started at the University of Alabama in 2006. From 2006 to 2009, Anders played for the Crimson Tide as a linebacker, starting 14 games in his senior season. His career at Alabama culminated with a victory in the 2009 BCS National Championship against the Texas Longhorns, a game in which he led the Crimson Tide with seven tackles and a forced fumble.  After college he signed a free agent contract with the Cleveland Browns of the NFL. He also had stints in the Canadian Football League and the Arena Football League before beginning a career in mixed martial arts. Anders and his wife Yasmin are married and have two sons, Israel and Noah.
Anders began his mixed martial arts career in 2012 as an amateur, participating in 22 amateur bouts, although his official record is listed as 13-3-1 before his professional debut against Josh Rasberry on August 22, 2015 for Strike Hard Productions. He defeated Rasberry in just 40 seconds via TKO.  In his second professional fight he defeated Demarcus Sharpe by unanimous decision. Anders defeated Garrick James by TKO. Anders next defeated Dekaire Sanders by submission via rear naked choke. For his fifth professional fight he defeated Jesse Grun by TKO due to punches. He made his Bellator debut on October 21, 2016, defeating Brian White by TKO in 23 seconds.
Anders next joined Legacy Fighting Alliance. He defeated Jon Kirk by TKO at LFA 6: Junior vs. Rodriguez on March 10, 2017. On June 23, 2017, Anders fought for the Legacy Fighting Alliance middleweight championship. He defeated Brendan Allen via a 49-46 unanimous decision to gain the championship. Anders made his UFC debut against Rafael Natal at UFC on FOX 25, as a late replacement for Alessio di Chirico who was forced to withdraw due to a neck injury. He won the fight via knockout in the first round.  Anders was expected to face John Phillips on December 9, 2017 at UFC Fight Night 123. However, Phillips was removed from the card and was replaced by promotional newcomer Markus Perez Echeimberg on December 9, 2017 at UFC Fight Night 123. Anders won the fight by unanimous decision. Anders faced Lyoto Machida on February 3, 2018 at UFC Fight Night 125. He lost the fight via controversial split decision. 16 of 23 media outlets scored the fight for Anders. Anders faced Tim Williams on August 25, 2018 at UFC Fight Night 135. He won the fight via knockout due to a head kick in the third round. This fight earned him the Performance of Night award. Anders was tabbed as a short notice replacement for Jimi Manuwa, and he faced Thiago Santos in a light heavyweight bout at UFC Fight Night 137. Anders lost via referee stoppage TKO when Anders collapsed and failed to make it to his corner at the conclusion of round three. This fight earned him the Fight of the Night award. Making a quick turnaround to the Octagon, Anders returned to middleweight to replace Antônio Carlos Júnior in a bout against Elias Theodorou at UFC 231 on December 8, 2018. He lost the fight via split decision. Anders faced Khalil Rountree on April 13, 2019 at UFC 236.He lost the fight via unanimous decision. Anders faced Vinicius Moreira, replacing Roman Dolidze, on June 29, 2019 at UFC on ESPN 3. He won the fight via knockout in the first round. This fight earned him the Performance of the Night award. Anders faced Gerald Meerschaert in a middleweight bout on October 12, 2019 at UFC on ESPN+ 19. He won the fight by split decision.
Anders was scheduled to face Krzysztof Jotko on April 11, 2020 at UFC Fight Night 172. Due to the COVID-19 pandemic, the event was eventually postponed to May 16, 2020 at UFC on ESPN: Overeem vs. Harris.He lost the fight via unanimous decision.