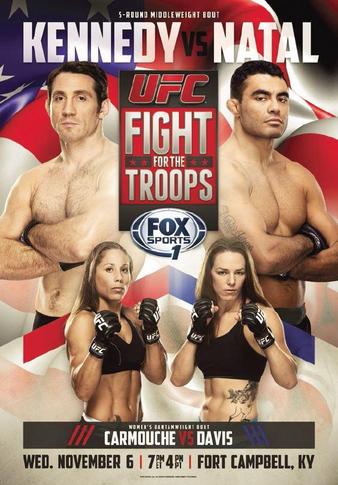 Tapology members can make predictions for upcoming MMA & Boxing fights. UFC Fight Night 31 is closed for new predictions. 1,168 total members made predictions on this event, breaking down as follows below.

This event was the fourth event that the UFC has hosted in cooperation with a US military base, following UFC FIght Night: Sanchez vs. Riggs (2006) UFC: Fight for the Troops (2008) and UFC: Fight for the Troops 2 (2011). It took place at Fort Campbell, Kentucky and featured four current or former members of the US military. Tim Kennedy was in the main event and is a former Army Ranger sniper. Liz Carmouche was in the co main event and is a retired Marine helicopter electrician. Colton Smith was an active Staff Sgt. in the Army. Neil Magny was a Sgt. In the Illinois National Guard.

Tim Kennedy was originally expected to face Lyoto Machida on this card. But the injury of Michael Bisping caused Machida to be removed from the card to fight Mark Munoz. Machida was then Replaced by Rafael Natal. A bout between George Roop and Francisco Rivera, previously linked to UFC 166 was moved to this event to bolster the card.

The fight between Bobby Green and James Krause ended in controversy. Green threw two low blows in the first minute and was deducted a point. When a third appeared to be landed at the 1:13 mark, referee John McCarthy stopped the fight and declared Greem the winner. He later stated that he believed the shot hit the waist line of Krause and not the groin so when Krause fell to the ground screaming, he believed that Krause was verbally submitting therefore making Green the winner by TKO. In a replay of the kick, it appears that the kick hit Krause's shorts line and may have grazed his cup. A rematch between the two is likely.

Knockout of the Night: Tim Kennedy

Submission of the Night: Mike Chiesa

Fight of the Night: Rustam Khabilov vs Jorge Masvidal

Watch Dana White's behind-the-scenes blog for UFC: Fight for the Troops 3 and Belfort vs. Henderson 2.

Watch the joint trailer for Tim Kennedy vs. Rafael Natal and the rematch between Vitor Belfort and Dan Henderson.

Interview  |  UFC Fight for the Troops: On Base Day1 report dead link

Watch some entertaining media interviews with UFC starts before UFC Fight for the Troops: Kennedy vs. Natal.

Watch the media interviews with the headliners from UFC Fight Night: Kennedy vs. Natal.