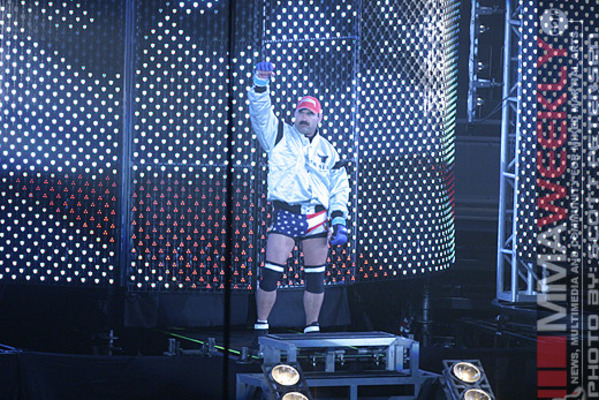 Don Frye is ineligible for regional rankings due to inactivity.
Fighters must have at least one completed MMA bout in the past two years to be ranked.

Retired UFC legend Don “The Predator” Frye was one of the promotion’s greatest early fighters. He is a former high-level freestyle and Greco-Roman wrestler who won victories at the United States Olympic qualifiers, as well as a boxer and a 2nd degree black belt in Judo. Throughout his lengthy career in the UFC and Pride, the rugged-looking, moustached Frye had one of the most intimidating scowls in the business. He could also back it up. Frye lost only one fight in his first six years as a professional, to Mark “The Hammer” Coleman, and had notable wins over Gary Goodridge, “Tank” Abbott and Ken Shamrock during that notable run.  He won both the UFC and Ultimate Ultimate 2 tournaments.  He was supposed to fight Mark Coleman in a rematch at UFC 12 but his hand was not healed from the UU2 fight with Tank Abbott.  He never fought in the UFC again.  He later got his rematch with Mark Coleman at Pride 26 and lost by unanimous decision.

In 1995, Dan helped his friend Dan Severn train for The Ultimate Ultimate '95. The following year he joined the UFC himself for UFC 8. In that event he set the record for fastest knockout in the UFC with his win over Thomas Ramirez, which was not broken until Duane Ludwig's knockout of Jonathan Goulet at UFC Fight Night 3.

Frye was known first and foremost for his toughness and his ability to outlast opponents in an era in which fighters did not always focus on pre-fight conditioning. Frye was also involved in some of Pride FC’s most memorable moments, including an all-out hockey-style slugfest with Yoshihiro Takayama at Pride 23, and one of the sport’s all-time greatest staredowns with Ken Shamrock prior to their Pride 19 grudge match. Frye narrowly won that affair at the cost of serious damage to his ankles courtesy of “The World’s Most Dangerous Man’s” trademark leglocks. Frye is also known as one of the most entertaining interviewees in the business. He is funny, opinionated, and willing to say just about anything.

A highlight video of the legendary Don "The Predator" Frye