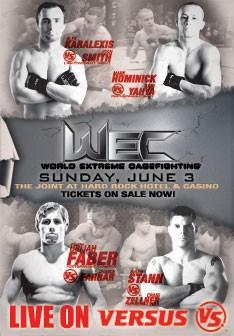 After making his name with a series of dominant title defenses at WEC 25 and WEC 26 respectively, Featherweight Champion Urijah Faber broke out with his title defense in the main event of WEC 28: Wreckage, which was the first WEC event to be televised live on the U.S. cable television network, Versus. The victory over Chance Farrar was Faber’s third title defense, and it solidified his position not only as the top featherweight in the world, but also—according to many fans and pundits—as one of the best pound-for-pound fighters as well. The Versus network became the WEC’s home on cable for many events to come.