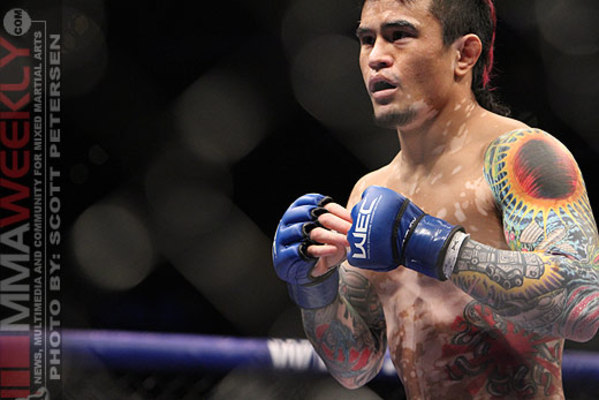 Scott Jorgensen is ineligible for regional rankings due to inactivity.
Fighters must have at least one completed MMA bout in the past two years to be ranked.

Scott "Young Guns" Jorgensen started wrestling in 3rd grade and made it all the way to division one Boise State University. While in school he became a three-time Pac-10 Champion.

Soon after his wrestling career ended he turned to MMA. After compiling a 4-1 record fighting at local shows and once for ShoXC, Jorgensen got a call from the WEC. After settling in to the organization, Jorgensen went on a 5 fight winning streak earning a shot at the WEC and for the first time ever the UFC 135 lb. belts against champion Dominick Cruz. Jorgensen lost a unanimous decision in the final WEC event before the merger with the UFC.

Jorgensen won his first two UFC fights over Ken Stone and Jeff Curran before dropping consecutive fights to now interim UFC Bantamweight Champion Renan Barao and former WEC Bantamweight Champion Eddie Wineland. Jorgensen would bounce back with a Submission of the Night and Fight of the Night over John Albert. Jorgensen was put in a couple of tough positions but was able to fight back and get his own submission with 1 second left in the round. He would next step in against Urijah Faber in the main event of The Ultimate Fighter 17 Finale, but he would be submitted in the fourth round. He would decide to drop to flyweight for his next fight when he was scheduled to take on Ian McCall at UFC on Fox 9, but his opponent had to withdraw with a hand injury. He would instead take on former Bellator bantamweight champion, Zach Makovsky, but he would lose a unanimous decision. He would then take on Jussier da Silva at UFC Fight Night 38 but would lose by submission in the first round giving him his third straight loss.