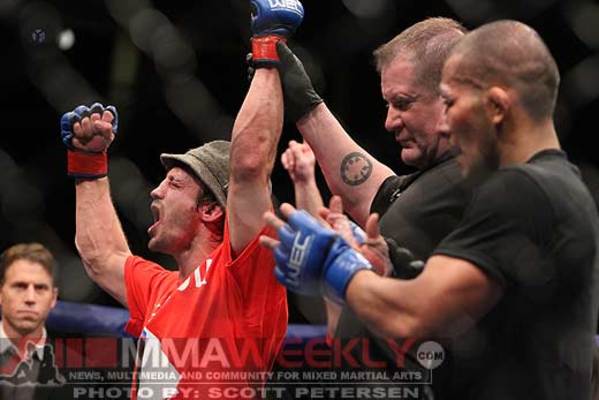 Brad Pickett is ineligible for regional rankings due to inactivity.
Fighters must have at least one completed MMA bout in the past two years to be ranked.

Pickett has been a veteran of UCMMA, Cage Rage, WEC, and the UFC. He is best known for his aggressive fighting style and has been named by Mike Goldberg and Dana White as one of their favorite fighters to watch due to his crowd pleasing fighting style. Although he he is known for powerful knockouts, as demonstrated my his nickname, he is also a submission artist and has more wins by submission (10) than by knockout (7). Brad's nickname and his flamboyant entrance to the ring are not derived from Brad Pitt's character "One Punch Mickey" from the movie Snatch but from his grandfather. His unique entrance sees him entering to the song "Wallop" by Chas & Dave, wearing a string vest, cutoff jeans and his customary trilby hat. He is a supporter of the London football club Tottenham Hotspur. He currently trains at American Top Team in Coconut Creek, Florida. He has a total of 5 "of the night" bonuses under the Zuffa banner.

He has fought mainly for the Cage Rage organization. Pickett's first appearance was on 27 November 2004 with a win over Stuart Grant. Pickett became the British Cage Rage Featherweight Champion on 10 September 2005 at Cage Rage 13 by defeating Ozzy Haluk via submission following a flying footstomp to the face. Pickett later lost the belt to the tough Robbie Olivier by rear naked choke in round 3. He is the former UCMMA Featherweight champion. On August 22, at Ultimate Challenge MMA: Payback (held in The Troxy, London), Brad Pickett won his seventh successive mixed martial arts bout against David Lee. Brad's win came due to a guillotine choke during the first round in which Lee came out very aggressive, but could not match Pickett's skill on the ground.

On October 30, 2009, the Zuffa-owned WEC announced they had signed Pickett to a multi-fight deal. Pickett, fighting at bantamweight, made his WEC debut against Kyle Dietz on December 19, 2009 at WEC 45. He won the fight via submission in the second round by Peruvian neck tie, also winning Submission of the Night honours. Pickett next faced WEC newcomer Demetrious Johnson on April 24, 2010 at WEC 48. In a competitive fight; both men exchanged takedowns and strikes throughout the fight, though Pickett asserted more dominance on the ground, controlling the fight with well timed takedowns and counterstrikes, winning via unanimous decision. Pickett's next bout was against WEC veteran Scott Jorgensen. Pickett experienced some success on his feet during the first two rounds, but was ultimately outwrestled by the 3-time Pac 10 champion in the latter two rounds, losing to Jorgenson 30-27 on all the judges scorecards. Pickett then faced Ivan Menjivar on December 16, 2010 at WEC 53. Both fighters proved to be very evenly matched; Pickett edging the first stanza with slightly crisper striking & well timed counter takedowns (during Menjivar's spinning backfist attempts), but in the second he was visibly staggered by a stream of strikes from his opponent which he battled through by securing a takedown. In the third, the two continued the fashion of tenaciously exchanging strikes throughout the fight, with Pickett scoring a flash knockdown with a flush overhand right. Menjivar showed great heart in recovering though, and continued to exchange until the final bell. In the end Pickett edged a unanimous decision.

Pickett was expected to make his UFC debut against former WEC Bantamweight Champion Miguel Torres on May 28, 2011 at UFC 130. However, Pickett was forced out of the bout with an injury and replaced by Demetrious Johnson. Pickett faced Renan Barão on November 5, 2011 at UFC 138. Pickett was submitted in the first round via rear-naked choke after getting dropped by a flurry from Barao. The bout earned Fight of the Night honors. Pickett defeated Damacio Page by submission via rear-naked-choke in the second round of UFC on Fuel TV: Gustafsson vs. Silva on April 14, 2012. The bout earned Fight of the Night. Pickett next fought Yves Jabouin on September 29, 2012 at UFC on Fuel TV 5. He won the fight via first round KO, earning "Knockout of the Night" honors in the process.

Pickett took on Eddie Wineland at UFC 155. The fight was fast paced and exciting throughout. He was rocked several times in the first round but was able to continually to walk through Wineland's best shots. Ultimately, he lost a split decision. He would bounce back with a Split Decision victory over Mike Easton that also earned Fight of the Night honors. He would drop his next match to Michael McDonald prompting a drop in weight classes.

Pickett would debut at the flyweight weight class at UFC Fight Night 37 when he fought Neil Seery. In a good back and forth battle Pickett was able to pick up his first win at flyweight by unanimous decision.