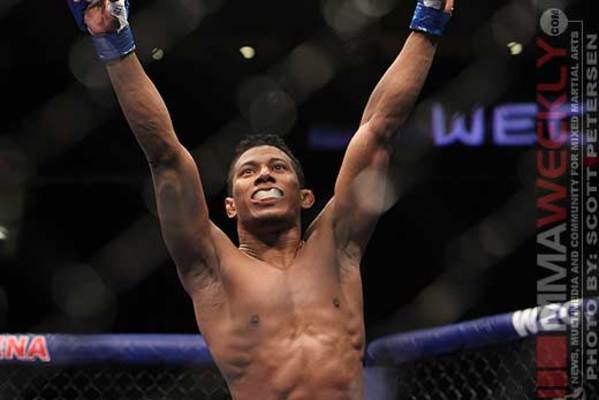 Fighting for a major organization has made Iuri Alcântara ineligible for regional rankings.

Alcantara was born on the island of Marajó, Pará in Brazil. Incidentally, Alcantara takes his fighting nickname from the island and is billed as Yuri "Marajó" Alcantara. Alcantara trains at the "Striker Team" team and is managed by Wallid Ismail, the owner of the Jungle Fight promotion that Alcantara has competed in and won a championship. Alcantara's early career was spaced out considerably. His debut fight took place in March 2004 and he would not return until June 2005, where he won twice in the space of four months. Amongst Alcantara's wins was a grand prix tournament victory in November 2009, when he defeated two fighters in a single night.

On October 28, 2010, World Extreme Cagefighting merged with the Ultimate Fighting Championship. As part of the merger, most WEC fighters were transferred to the UFC.Alcantara was expected to make his featherweight debut against Mackens Semerzier on August 27, 2011 at UFC 134 However, Semerzier was injured and was replaced on the card by UFC newcomer Antonio Carvalho. Carvalho also was forced from the bout, with an injury, and replaced by Felipe Arantes. He won the fight via unanimous decision. Alcantara faced Michihiro Omigawa on January 14, 2012 at UFC 142. He won the fight via unanimous decision after dominating Omigawa, rocking him on several occasions and almost submitting him with an armbar. Alcantara faced promotional newcomer Hacran Dias on June 23, 2012 at UFC 147. He lost the fight by a hard fought unanimous decision. He would get a no contest against Pedro Nobre for illegal strikes. He would finish Iliarde Santos to get back in the win column before dropping a decision to Urijah Faber. He would boucne back with a split decision over Wilson Reis.