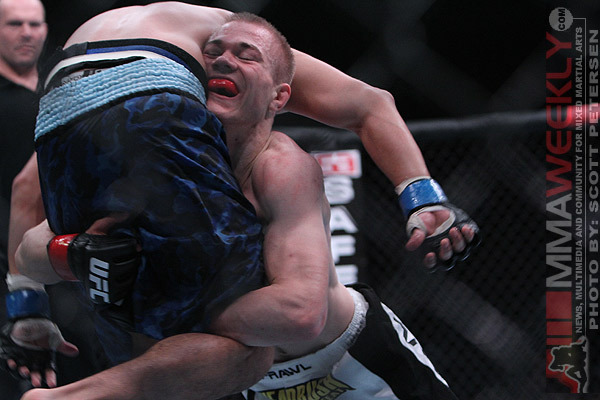 Michael McDonald is ineligible for regional rankings due to inactivity.
Fighters must have at least one completed MMA bout in the past two years to be ranked.

Prior to trying his hand at MMA, Michael McDonald was a successful amateur kickboxer. He has quickly established himself as one of the top prospects in the UFC's bantamweight division after making his debut in March, 2011. A technical striker with solid takedowns and ground skills, McDonald has been cited by many as a potential future contender for the bantamweight crown.

Before joining the UFC, McDonald compiled a 10-1 pro record, avenging his only career loss by knocking out veteran Cole Escovedo with punches in 2010. After winning his only fight in the WEC, McDonald wowed fans in Seattle, Washington by winning a dominant, albeit extremely entertaining Unanimous Decision over Edwin Figueroa upon his debut in the UFC.

At UFC 145, McDonald faced off against perennial contender and former WEC Bantamweight Champion Miguel Torres. In an impressive and dominant showing, McDonald knocked out the former champ at 3:18 into round 1. He would then face off against Renan Barao for the Interim Bantamweight Championship belt. He would come up short when he got caught in an arm triangle in the fourth round. He would get back in the win column when he faced Brad Pickett at UFC on FOX Sports 1. McDonald almost finished off Pickett in the first round dropping him several times but he somehow survived. Pickett would end up on top in the second round and McDonald waited for the right moment to pounce locking up the triangle choke to get the Submission of the Night alongside Chael Sonnen as well as earning Fight of the Night. He would face Urijah Faber in the Co-Main Event of UFC on FOX 9 but would lose in the second round by submission.