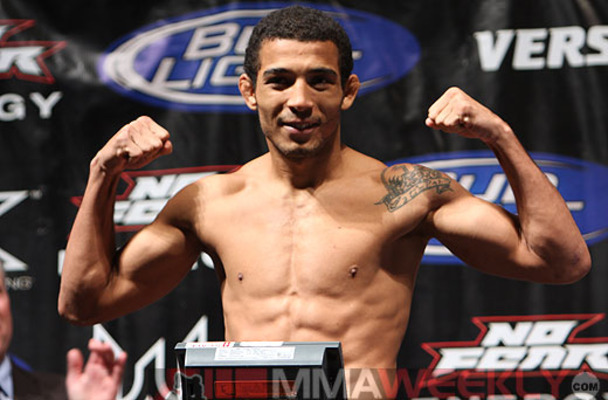 Fighting for a major organization has made José Aldo ineligible for regional rankings.

Jose Aldo "junior" is a black belt in Brazilian jujitsu under Andre pederneiras.

He is a black belt in luta livre esportiva under Marco Ruas.

UFC performance of the night one time vs Jeremy stephens

The most gifted fighter to emerge from the renowned Nova Uniao camp in Brazil, UFC fighter Jose Aldo is widely considered the greatest Featherweight of all time, losing only four times In his MMA career to date and turning in sensational, jaw-dropping performances with remarkable regularity. Jose Aldo got his nickname "Scarface" after a barbecue accident when he was young.

Aldo turned professional in 2004 at the age of 16 and has not looked back, racking up ten victories in eleven fights prior to signing with the WEC in 2008. Aldo did not lose a fight in the WEC, dominating top fighters like Alexandre Nogueira, Cub Swanson, Mike Thomas Brown, and Urijah Faber, seizing the WEC Featherweight Championship in the process.

Aldo’s knockout victory over Swanson at WEC 41 in 2009 remains one of the greatest knockouts in the promotion’s history, as Aldo knocked Swanson down just eight seconds into the fight with a double flying knee combination, lending further credence to the argument that Aldo is one of the greatest pound-for-pound fighters in the world today. This was the first time a fighter had landed a double flying knee in a major promotion.

Following his title defense over Mike Thomas Brown in 2009, the WEC and UFC merged. Aldo defended his title against Manvel Gamburyan to become the first ever UFC featherweight  champion. In his first title defense he would take on Mark Hominick winning the unanimous decision and causing a massive hematoma on Hominick's forehead. In his second title defense Aldo would retain the belt with another unanimous decision victory over the well rounded Kenny Florian. In his most recent defense he took on Chad Mendes whose wrestling might have been a key to cracking Aldo. Aldo responded with a vicious first round TKO from a well time knee to remain the UFC's featherweight champion.

In his next fight he would face off against former Lightweight Champion Frankie Edgar. Aldo looked impressive in the first 2 rounds and then had a very close 3rd round and possibly lost the last 2 rounds. Frankie's face showed the most damage and Aldo successfully defending his belt again winning by Unanimous Decision. Aldo's next test was supposed to be in August when Anthony Pettis would drop down to Featherweight to try and take his belt. However Pettis would pull out from the fight with a knee injury and Chan Sung Jung would instead step in to face Aldo on that UFC 163 card. Aldo would once again defend his belt. He dominated all three rounds before getting a TKO finish in the 4th when the Korean Zombie dislocated his shoulder when he threw a punch, Aldo reacted immediately kicking that shoulder and also broke his foot in the process but was able to get the stoppage.

Aldo would defend his title again at UFC 169 when he cruised to a Unanimous Decision victory over Ricardo Lamas.