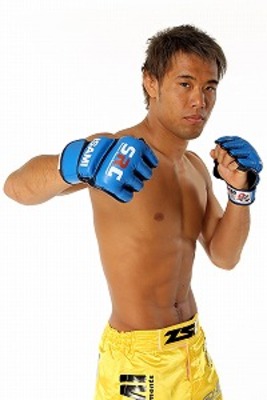 Fighting for a major organization has made Masanori Kanehara ineligible for regional rankings.

Masanori Kanehara is a Japanese mixed martial arts fighter from Tokyo, Japan. He was born on November 19, 1982. Kanehara is a brown belt in Brazilian jiu-jitsu. He is mostly recognized due to his exciting fighting style that constantly has fans cheering for him in appreciation to his skills.

Despite making his professional MMA debut in the Japanese organization, DEEP in a fight which he lost by submission to Isamu Sugiuchi, Kanehara first made ZST his early home promotion.

After achieving a mixed set of results in ZST, Kanehara toured around fighting in different organizations throughout Japan, such as HERO’S, Pancrase and DEEP.

Kanehara then found a new home when was invited into Sengoku to participate in their featherweight GP in 2009. He achieved much success in GP, as he made it to the semifinals, losing to Hatsu Hioki a close decision. Despite beating Kanehara in the semifinals, Hioki’s body was too bruised and battered for him to continue in the GP and Kanehara was chosen as Hioki’s replacement for the final. In the final, Kanehara as a replacement defeated Michihiro Omigawa to win the GP and become the inaugural Sengoku featherweight title holder.

Kanehara as SRC featherweight kingpin, fought Japanese MMA legend Norifumi “KID” Yamamoto at the annual Japanese NYE event, Dynamite!! in a non-title SRC vs. DREAM fight. Kanehara pulled what many considered at the time an upset, as he defeated the Japanese MMA legend by unanimous decision.

Kanehara however didn’t enjoy a long stay at the top of SRC featherweight division, as he dropped the title in his first defense against Brazilian Marlon Sandro being knocked out in 38 seconds of the first round.

Kanehara returned to action in a fight that would again see him get knocked out in brutal fashion, falling to Yoshiro Maeda in 1:27 of the first round.

Afterwards, SRC closed and Kanehara went around the world fighting in Japan, Russia and California. In the tour, Kanehara found much success winning most of the fights he participated in.

Kanehara since has made a return to the organization where he made his debut in, DEEP where he’s been fighting at regularly. However Kanehara has stated that his main goal is to fight in the UFC.