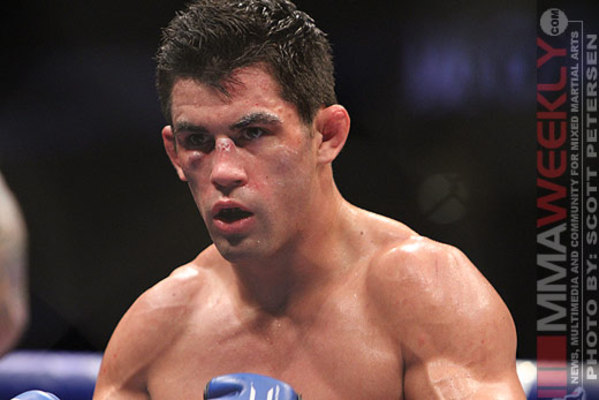 Fighting for a major organization has made Dominick Cruz ineligible for regional rankings.

After winning 9 straight contests without a loss to begin his professional career, Dominick Cruz jumped right into the deep end with his WEC debut in 2007, losing the first fight of his career to reigning WEC Featherweight Champion Urijah Faber. Following the loss, Cruz dropped to a more natural weight class of 135 lbs. and put together a five-fight winning streak, defeating the likes of Charlie Valencia, Joseph Benavidez, and Brian Bowles to take the WEC Bantamweight Championship in 2010.

After Capturing the title Cruz defended against Scott Jorgenson and Joseph Benavidez, both by decision. The WEC then merged with the UFC, where he became the company's first bantamweight champion. He was then scheduled to defend against the only person to ever defeat him, as the "California Kid" had recently moved down in weight class. He won that matchup by a close unanimous decision before outpointing future flyweight champion Demetrious Johnson.

He was then scheduled for a rubber match with Urijah Faber, after coaching a season of the Ultimate Fighter. However Cruz tore his ACL, and it was announced that his fight was off, and that he would be out for a long time. Cruz was replaced against Faber by Renan Barao, now for the interim championship belt. "The Baron" was victorious and was then scheduled to wait and face Cruz in a unification bout, but the "Dominator" received more bad news as his body had rejected the cadaver tissue to replace his ACL, and he would be out for longer than expected. Barao would instead defend against Michael McDonald.

Cruz was then set to return at UFC 168 but suffered a torn groin, prompting the UFC to strip him of his title and declare Barao the undisputed champ. Seven months later Dominick made his return to the octagon a week shy of three years after his last appearance where he blitzed veteran Takeya Mizugaki, knocking him out in 61 seconds. This was the first knockout loss for Mizugaki in nearly eight years and was Cruz's first finish, barring an injury victory against Brian Bowles, in six. He was inactive between October 1, 2011 and September 27, 2014 first due to TUF, and then multiple injuries.

Although he boasts one of the most impressive records in the international bantamweight division, Cruz is unique among champions in that he has finished fewer than half of his opponents to date, often striking his way to decision victories rather than knocking opponents out. Cruz has an unusual, and some would argue unsound, approach to striking, bobbing in and out on his opponents with unusual stances and footwork. His natural quickness and reflexes have made the strategy effective, and Cruz remains among the world’s top bantamweights. It is also worth mentioning 3 of the top flyweights in the world lost to Cruz before moving down to flyweight. Cruz defeated Ian McCall, Joseph Benavidez (twice), and Demetrious Johnson, before they were named three of the four participants of a tournament to crown the first UFC Flyweight Champion.

Kenny Rice sits down with Dominick Cruz to discuss his lengthy layoff and eventual return to the UFC following two surgeries.