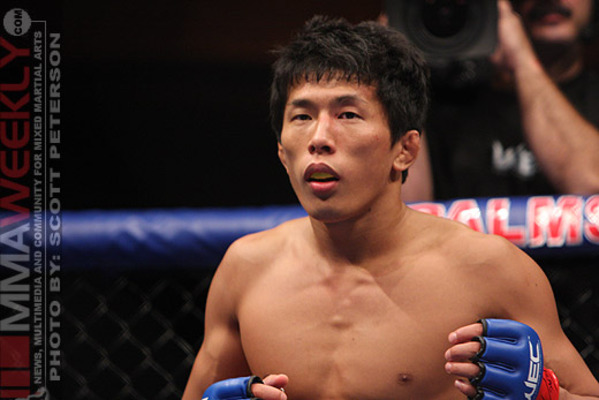 Takeya Mizugaki is ineligible for regional rankings due to inactivity.
Fighters must have at least one completed MMA bout in the past two years to be ranked.

Takeya Mizugaki is a Japanese bantamweight fighter currently signed to the UFC. He trains out of Hakkei Gym and Reversal Reversal Ground Slam Gym in Kanagawa, Japan. Takeya has fought for high profile promotions such as Shooto and the WEC and was the bantamweight champion for Cage Force in Japan. He holds notable victories over Jeff Curran, Rani Yahya, Cole Escovedo, Bryan Caraway and Erik Perez. He was named "Rookie of the Year" by Shooto in 2005 and won "Fight of the Night" honors two times while competing for the WEC. Takeya holds a Masters degree in Electrical Engineering from Kanto Gakuin University. Of his eighteen wins, only six have been finishes including five T/KOs.

Mizugaki began training in MMA after high school when the sport began to gain in popularity in Japan. He debuted with Shooto in 2005 and was named the "Rookie of the Year". He would spend just over two years with the promotion and was able to compile a 6-2-2 record. In late 2007, he would begin fighting for Cage Force in Tokyo, Japan. He would go 5-0 with the promotion in fifteen months while recording three straight finishes to earn the bantamweight championship.

In 2008, Takeya would be signed by the WEC. He would get an immediate title shot against then 37-1 champion, Miguel Torres at WEC 40. He would lose the fight by unanimous decision, but it marked the first time that anyone had been able to last a full five rounds with Torres. Their fight earned "Fight of the Night" honors.  Four months later, Mizugaki would get the biggest win of his career to that point when he defeated Jeff Curran by split decision. He would lose by decision again at WEC 45, this time to Scott Jorgensen, but would again receive the "Fight of the Night" bonus. He would defeat Rani Yahya by decision before facing Urijah Faber at WEC 52. The former WEC featherweight champion would choke out Takeya with only seconds left in the first round. He would leave the WEC with a 2-3 record.

When the WEC ceased operations, Mizugaki was moved to the UFC. He made his promotional debut against fellow newcomer, Reuben Duran, at UFC on Versus 3 and would pick up another split decision victory. He would receive his first loss in the UFC when he was defeated by decision by another former WEC fighter, Brian Bowles. Takeya picked up his first finish in nearly three years when he knocked out Cole Escovedo at UFC 135, but he would again lose by decision at UFC 144 to Chris Cariaso. He would pick up decision wins over Jeff Hougland, Bryan Caraway and Erik Perez over a ten month span. This marked the first time he had back to back wins in over four years. He fought Nam Phan at UFC Fight Night 33. Takeya would control much of the early fight and would pick up a unanimous decision victory. This bumped his win streak to four, something he had not done since 2008.

Prior to his fight with Phan, Takeya had the fifth most UFC/WEC victories in the bantamweight division with seven as well as the third longest average fight time at 14:32 and the second longest total fight time at 2:54:20. His 508 significant strike landed were the third most in the UFC/WEC bantamweight divisions history and his 937 total strikes landed were the second most. He also had the fifth highest number of takedowns in the division with twenty and he held the record for the highest takedown percentage with 74.1%.