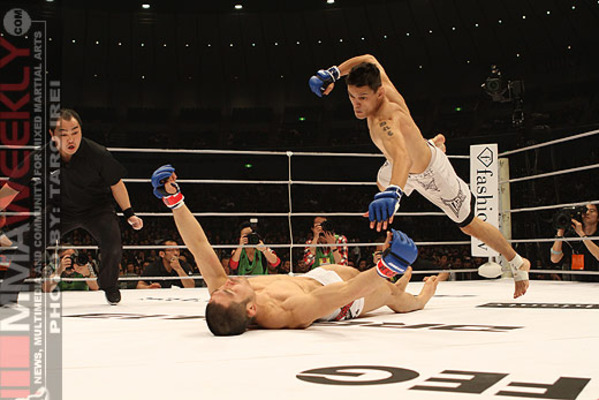 Cole Escovedo is ineligible for regional rankings due to inactivity.
Fighters must have at least one completed MMA bout in the past two years to be ranked.

After starting his career off at 145 lbs. and winning 11 of his first 12, including the first-ever WEC Featherweight Championship, Cole Escovedo looked to be the future of the lighter weight classes. Unfortunately, after suffering three back-to-back losses in the WEC and IFL to Urijah Faber, Jens Pulver, and Antonio Banuelos respectively, Escovedo was almost forced into retirement in 2006 after suffering a serious staph infection that left him partially paralyzed. In 2009, Escovedo made a triumphant return to the ring, winning five straight fights, including a pair of victories in Strikeforce and Dream, to usher in a new chapter to his storied career. A 2010 head kick knockout of Yoshiro Maeda capped off the inspiring comeback story in emphatic fashion.

After defeating eventual TUF 14 fighter Steven Siler by first round triangle choke, Escovedo would earn a spot in the UFC. He would go back to bantamweight to take on future UFC bantamweight title holder Renan Barao, where he lost a unanimous decision. Escovedo would drop his next two fights to Takeya Mizugaki and Alex Caceres, which would lead to his release from the UFC. Escovedo has since retired from MMA.

'The Apache Kid' will be remembered for a ten year long MMA career that saw him pick up victories against Bart Palaszewski, Steven Siler, as well as a brutal head kick knockout of Yoshiro Maeda in Dream. Escovedo also holds a victory over current UFC bantamweight contender Michael McDonald.