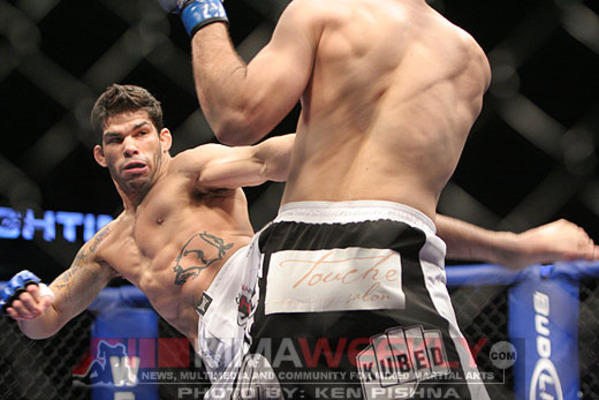 Fighting for a major organization has made Raphael Assunção ineligible for regional rankings.

Raphael Assuncao is a Brazilian bantamweight fighter currently signed to the UFC. He is a black belt in Brazilian Jiu Jitsu and trains out of Ascension Mixed Martial Arts in Atlanta, Georgia. He has previously fought for the WEC and has notable wins over Jorge Masvidal, Joe Lauzon, Yves Jabouin, Johnny Eduardo, Mike Easton, Vaughan Lee, and TJ Dillashaw. He has only been finished twice in his career with a submission loss to Urijah Faber and a knockout by Erik Koch. Of his twenty two wins, thirteen have been finishes with ten submissions. He fought most of his career at featherweight but dropped to bantamweight in 2011 where he is currently undefeated in six fights. He has won the "Fight of the Night" bonus one time.

Assuncao began his professional career in 2004 with a  first round TKO. Over the first four years of his career, he would compile a 13-1 record including wins over Jorge Masvidal and Joe Lauzon with his only loss coming by decision to Jeff Curan. In 2009, he was signed by the WEC. In his nineteen months with the promotion, he was able to amass a 3-2 record with wins over Jameel Massouh, LC Davis, and Yves Jabouin and losses to Urijah Faber and Diego Nunes.

When the WEC ceased operations in late 2011, Raphael would be signed by the UFC as a featherweight. He would lose his first fight to Erik Koch by brutal KO at UFC 128. He would drop to bantamweight after this fight. In his 135 pound debut, he was able to earn a unanimous decision win over Johnny Eduardo but was out for six months after with a broken nose. He would continue his winning ways with three wins in less than a year over Issei Tamura, Mike Easton and Vaughan Lee. He next fought TJ Dillashaw at UFC Fight Night 29. In a very exciting and close back and forth fight, Raphael was able to pick the split decision victory. Their fight would earn both fighters Fight of the Night honors. Riding a five fight winning streak, Assuncao would take on UFC debutant, Pedro Munhoz, at UFC 170. He would use a combination of superior striking and relentless cardio to secure a unanimous decision. He would then make it 7 in a row (and 7-0 total at Bantamweight) by defeating Bryan Caraway at UFC Fight Night 54: MacDonald vs. Saffiedine in October 2014 via a dominant unanimous decision despite breaking his arm in round 1 and followed the win by asking for a title shot which he felt was already overdue considering not only his undefeated BW record, but also the fact that he was the last person to defeat the current champion.

On November 11, 2017, Assuncao faced Matthew Lopez at UFN 120. Assuncao won the fight by KO in round three via punches.

On February 2nd 2019 Assuncao had a rematch with Marlon Moraes at UFC on ESPN+2. Although Assuncao won the first fight by decision, Moraes would win the fight in decisive fashion by guillotine choke in round one.

Assuncao faced Cory Sandhagen at UFC 241. He was steadily outpointed by the taller Sandhagen and lost the fight by unanimous decision.

Assuncao is a black belt in Brazilian jiu-jitsu

UFC fight of the night one time against Tj Dillashaw

UFC performance of the night one time against Matthew Lopez