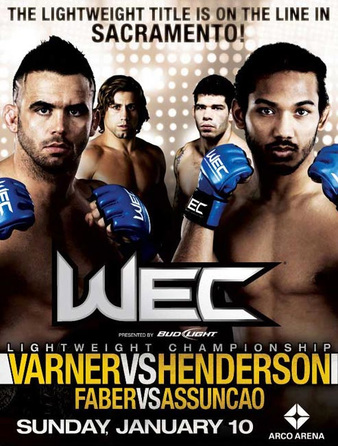 Tapology members can make predictions for upcoming MMA & Boxing fights. WEC 46 is closed for new predictions. 10 total members made predictions on this event, breaking down as follows below.

Leaderboard of the best predictions by member: WEC 46 Leaderboard

In the first WEC event of 2010, Interim Lightweight Champion Ben Henderson, who had impressed many with his close Unanimous Decision performance against Donald Cerrone in 2009, defeated Jamie Varner to take the Undisputed Lightweight Championship in the main event of the evening. The wins over Cerrone and Varner, taken together, finally began to earn Henderson some much-deserved respect. In the co-main event, former Featherweight Champion Urijah Faber reemerged as the top contender to the belt with a third-round Rear Naked Choke submission of Raphael Assuncao.

The WEC produced this promo video for WEC 46: Varner vs. Henderson.

The WEC brings us highlights of WEC 46: Varner vs. Henderson.