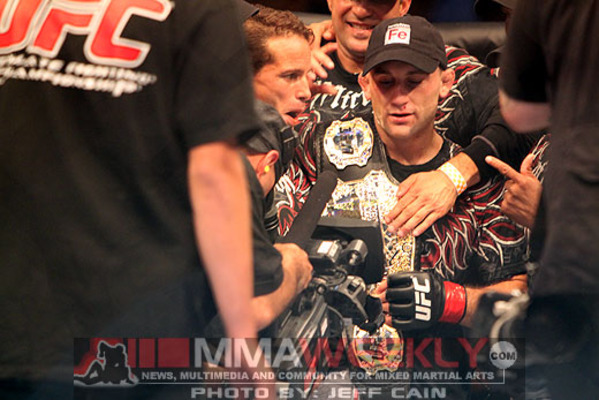 Fighting for a major organization has made Frankie Edgar ineligible for regional rankings.

On April 10, 2010, at UFC 112 from Abu Dhabi, United Arab Emirates, lightweight fighter Frankie “The Answer” Edgar shocked the MMA world. In a title fight that he entered as a huge underdog, Edgar defeated MMA deity B.J. “The Prodigy” Penn in a five round standup war to seize the UFC lightweight title. In doing so, Edgar was the first man to defeat Penn at lightweight in almost eight years. The keys to the fight were Edgar's leg kicks which exploited Penn's boxing stance, as well as Edgar's constant movement. Edgar was able to avoid Penn's powerful punches that led to victories over Kenny Florian, Diego Sanchez, and Sean Sherk. However, there was some controversy as some felt that Edgar's softer punches had not been enough to earn the decision. In response the "Prodigy" was given an immediate rematch, but Edgar  won that fight more convincingly.

Prior to winning the UFC Lightweight Championship, however, the spirited fighter and former collegiate wrestler out of Toms River, New Jersey was already one of the division’s best, and had been defeated only once as a professional. Edgar’s resume, in fact, is dotted with wins over major league MMA talent, including 155 lb. wrecking balls Tyson Griffin and Sean Sherk, as well as Brazilian Jiu-Jitsu wizards Hermes Franca and Mark Bocek. To those that had followed his career progression closely, Edgar’s title performance against Penn was far less surprising.

Frankie Edgar’s key to success inside the Octagon has been his ability to remain technical even when fighting at an extremely high pace. That speaks to hard work and enormous diligence in training, as well as an ability to stay calm under fire. Edgar has sharp boxing, makes effective use of his jab, and draws on his foundation as a standout wrestler. Edgar has a somewhat spare frame for a lightweight, and the fact that he could easily cut to 145 lbs. makes his record of performance in the bigger (and more lucrative) lightweight division all the more impressive. With few other discernible weaknesses outside of his natural size, plus a deep competitive streak to keep him motivated, Frankie Edgar looks poised to add victories for many years to come.

After the second Penn match, Edgar was matched with the only man who held a victory over the "Answer", Gray Maynard. In the first round the much larger Maynard was able to drop Edgar several times, almost knocking him out but unable to finish him. After the first round, it was apparent that Maynard had punched himself out, and Edgar was able to battle his way to a majority draw. Following the match it was announced that Edgar would have an immediate rematch with Maynard, instead of fighting planned challenger Anthony Pettis. However, both Edgar and Maynard suffered injuries and their rematch had to be postponed.

They fought again nine months later, and again Maynard was almost able to knock out Edgar, in the first round with the "Answer" battling back in the following rounds. This time however, Edgar was able to knock out Maynard to end their thrilling trilogy.

Following a unanimous decision loss to Ben Henderson in his 3rd title defense, and a split decision loss in his rematch, Edgar would then move down to featherweight for a potential super fight with long time champion Jose Aldo. Edgar would lose a unanimous decision to the champ in another close fight that Edgar always seems to find himself in. In his next fight Edgar looked to avoid a 4 fight losing streak and pick up his first win at featherweight when faced he Charles Oliveira at UFC 162. In a fight many thought would be an easy win Oliveira put up a great fight but Edgar went on to win the Unanimous Decision victory as well as Fight of the Night honors for the 6th time.

Edgar would then become a coach for the 19th season of The Ultimate Fighter against BJ Penn. The two would fight for a third time, this time at Featherweight. Edgar would close the trilogy in dominating fashion this time leaving no question as to who the winner was finishing BJ by TKO in the third round.

Interview  |  Behind the Lens with Frankie Edgar report dead link