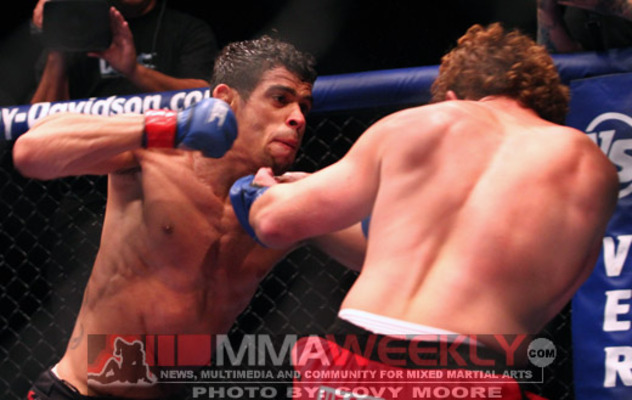 Renan Barão is ineligible for regional rankings due to inactivity.
Fighters must have at least one completed MMA bout in the past two years to be ranked.

Renan do Nascimento Mota Pegado, or just Renan Barao began his career in Natal with the team Nova Uniao Kimura, a subsidiary of Nova Uniao gym in Rio Grande do Norte. He went to Rio de Janeiro, alongside friends and fellow fighters Ronny Markes and Ronys Torres. They had to live in a loft in the old gym / Nova Uniao headquarters, which had no windows, no doors, and the first night, ran out places to sleep because of a rain that flooded the place. According to Barao, those difficulties helped strengthen him to get where he is today. Barao currently trains with great fighters like Jose Aldo, featherweight champion of the UFC, among others. He became a professional MMA fighter in 2005 at the age of 18.

That first professional fight in 2005 was a decision lose to João Paulo Rodrigues at an event in his home town of Natal.  Perhaps the taste of defeat was something the young Brazilian did not like as after the lose he would go on to win an impressive 23 fights in a row in Brazil namely with the Shooto organization.  Of those 23 wins 10 came by way of submission while another 6 were by TKO.

Move to the US and WEC

By 2010 Renan had made a name for him self as one of the best up and coming fighters in Brazil and the WEC promotion who features lighter weight classes came calling.  Renan made his debut with WEC in a catchweight bout against Anthony Leone at WEC 49 in Edmonton, Alberta.  Renan picked up another submission win over Leone and proved his hype could be real.  The next test for Barao was Chris Cariaso who at the time was on a 4 fight win streak.  Barao ended up picking up his 12th career submission win at what ended up being WEC's last show ever and would be merged into the UFC.

Renan's UFC debut would turn out to be former WEC Featherweight Champion Cole Escovedo at UFC 130. Barao used wrestling and takedowns to control Escovedo throughout the fight to gain the decision win. Renan's next fight would be put on a big stage as he was the co-main event against Brad Pickett at UFC 138 in November 2011. Although now pushing his win streak to an incredible 26 fights there were still some disbelievers of Renan's talents. During that night Renan perhaps put those doubts to rest as he dismantled Pickett on the feet using a flying knee to drop Pickett to the mat which allowed him to attack his back and get his 13th submission win of his career. The win seemingly put Barao on the brink of a title shot and win over his next opponent Scott Jorgensen at UFC 143 would most likely leave no doubt. Barao cruised to a unanimous decision using his reach and speed to out match Jorgensen.

Barao had an interesting path to his next fight as opponent Jeff Hougland whom he was scheduled to face at UFC 148 got injured. Ivan Menjivar was then slated to face Renan at the same event as a potential #1 contender bout to face the winner of the Dominick Cruz vs Urijah Faber title fight. An injury to Champion Dominick Cruz open up the door for Renan's biggest fight in his career as he would now face Urijah Faber in the Co-Main Event for UFC 148 for the Interim Bantamweight Title. Yet one more change to his schedule would take place as his bout with Faber would be moved  a few weeks later to  headline UFC 149 after that event was decimated with injuries to it's main card. Once he finally got in the octagon against Faber he left no doubt who the better fighter was that night as he controlled from start to finish using his speed, reach striking and takedown defense to take Faber completely out of the fight. Now the Interim Bantamweight Champion on a 29 fight win streak Barao would have to defend the interim title when he fought Michael McDonald and was able to choke him out in the fourth round. With Dominick Cruz still unable to return to the octagon Barao will put his win streak on the line as well as the interim belt when he faces Eddie Wineland at UFC 161. Barao would go on to finish Wineland in emphatic fashion with a spinning back kick in the second round.

Following another devastating injury to champion Dominick Cruz in early 2014, Barao was promoted to Undisputed Champion status when Cruz decided to vacate his belt rather than tie up the division for another lengthy absence. Barao's first title defense would be a rematch with the surging Urijah Faber on Super Bowl Weekend on February 1, 2014. Barao's reign would continue when he was able to rock Faber several times before Herb Dean stepped in to stop the fight. It was a somewhat questionable stoppage as Faber was covering up and only taking shots to his glove, however he was not moving at all and Herb stepped in to stop the fight. His next defense will be in the main event of UFC 173 against T.J. Dillashaw. Dillashaw would go on to capture the UFC title defeating Barâo via TKO in the 5th round. Dillashaw was also leading on all scorecards leading up to the TKO.


Road Back to Contention

Following his loss, despite losing in convincing fashion Barâo was awarded a rematch with Dillashaw at UFC 177. While cutting weight, Barâo would slip and knocked himself unconscious the day before the fight. He was taken to the hospital for emergency fluids and observation. Subsequently Barâo would be pulled from his rematch with Dillashaw and replaced by UFC newcomer, Joe Soto.
Frustrated with Barâo, UFC president Dana White said that he would not receive another title shot before fighting again due to him missing weight at UFC 177. Barâo would then be slated to face Mitch Gagnon at UFC Fight Night 58. Despite a back and forth first two rounds, Barâo would go on to win via arm-triangle choke in the 3rd round.