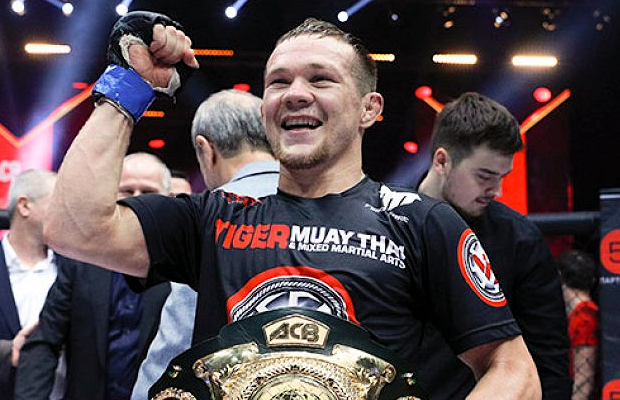 Fighting for a major organization has made Petr Yan ineligible for regional rankings.

Petr Evgenyevich Yan was born in the town of Dudinka on the 11th of February 1993. At age 11 in 6th grade Yan would start training Taekwon-do and during his youth Yan would get into various altercations in the streets and at his school in his area leading to his parents moving multiple times in order to prevent these conflicts. Yan would start training in boxing at the age of 13 after being inspired by his older brother who was initially hesitant to let Yan join him in training boxing, Yan would often sneak and follow his brother in order to learn boxing. Yan would continue to train boxing for 8 years eventually earning the rank of Master of Sport in boxing in his weight class (64kg). Besides Yan's athletic achievements Yan would also graduate from the Siberian Federal University located in Omsk with a degree in Physical Culture and Sport.

Yan would make his professional MMA debut in December 2014, defeating Murad Bakiev by KO in the third round of the contest. After this fight Yan signed with a Russian promotion called Absolute Championship Berkut, in his debut for ACB Yan would beat Renato Velame by unanimous decision.

Yan would go on and build an impressive 5-0 record with 2 KO/TKO finishes, 1 submission and 2 decision victories against opponent such as Kharon Orzumiev and Murad Kalamov.

Yan's impressive performances would earn him a title shot at the vacant ACB Bantamweight Championship in 2016, in this fight Yan would suffer his first career loss by split decision against Magomed Magomedov however many including the Owner of ACB felt that Yan was winning the fight and he was granted a rematch after picking up a decision win against Ed Arthur by unanimous decision in 2016. Yan would win his rematch with Magomedov by decision before defending it once against Matheus Mattos, a fight that Yan would win by TKO in the third round.

Yan's impressive performances in Russia did not go unnoticed, on the 23th of June 2018 Yan (8-1) would make his UFC debut against Teruto Ishihara, a bout that would not last long as Yan finished Ishihara by KO in the first round.

In July 2020 Yan would get his first chance at UFC gold which was vacant after Henry Cejudo retired Yan fought against UFC legend Jose Aldo at UFC 251, Yan would secure the UFC Bantamweight Championship by defeating Aldo by TKO in the 5th round. Referee Leon Roberts was critiqued for letting the fight continue for to long many thought the stopage was late.

Yan, 15-1 (7-0 in the UFC) the new Champion UFC champion would face Aljamain Sterling next in a controversial title fight that (at the time of writing this wiki) is still is a part of the daily conversation months after the bout. Yan is widely regarded to have had the upper hand during his first UFC title defense against Aljamain Sterling but got disqualified due to an illegal knee thrown in the fourth round of the fight. Sterling has been heavily critiqued for the way he acted after being hit with the knee and the way he has behaved himself after winning the UFC Bantamweight title on various media platforms.

The rematch was set on Oct. 30 2021 at UFC 267 Aljamain Sterling withdrew citing a neck injury, he was replaced by Cory Sandhagen. Yan won after 5 rounds and became the new interim bantamweight Champion.

The rematch took place on the 9th of april 2022 at UFC 273. Aljamain won the fight by split decision. Fans disagreed with the result however i can not be determined if this was due to bias against Aljamain following his controversial title win.