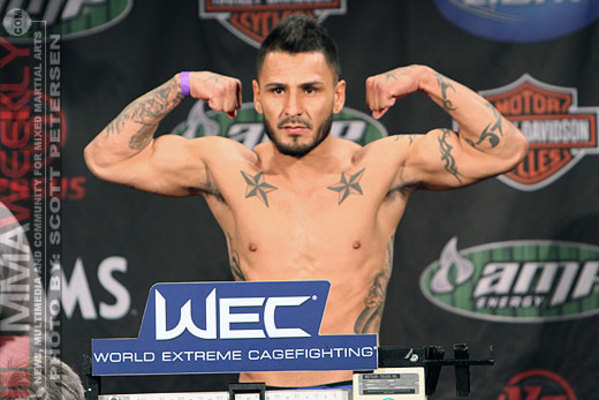 Francisco Rivera is an American bantamweight fighter currently signed to the UFC. He trains out of United MMA in Buena Park, California. He has fought for promotions such as the WEC and Tachi Palace Fights. Of his ten wins, seven have come via T/KO.

Rivera was able to compile a 5-0 record before being signed by the WEC. He would make his promotional debut against Erik Koch at WEC 52 but would lose a TKO. When the WEC ceased operations, he would be signed by the UFC. He would make his debut by taking on Rueben Duran but would lose via submission in the third round and was subsequently released from the promotion.

Upon his release, Cisco would sign with Tachi Palace Fights and would win two knockout wins in a total of less than two minutes. He would again be signed to the UFC. He would pick up his first win for the promotion with a decision victory over Alex Soto. He would knockout Roland Delorme at UFC 149 but the fight would be overturned when Rivera failed his drug test and recieved a suspension. He would return to action at UFC 156 and picked up another TKO victory, this time over Edwin Figueroa. He next took on the veteran, George Roop, at UFC: Fight for the Troops 3 and was able to secure a second round TKO to run his win streak to five.

He was set to take on Raphael Assuncao at UFC 170, But ultimately the bout would not take place due to Rivera suffering a broken hand, forcing him to withdraw from the fight. He returned to the cage 3 months later on 5/24/14 at UFC 173 to fight Takeya Mizugaki, Rivera ended up losing a Unanimous decision after an entertaining 3 round war. Still set on fighting top competition Rivera is set to take on "The California Kid" Urijah Faber this Saturday December 6th on the main event of the Preliminary Card at UFC 181.

In Rivera's next fight, he did not take long to get back into the win column. He made short work of Alex Caceres, at UFC Fight Night 68: Boetsch vs. Henderson. In only 21 seconds Rivera dropped Caceres and forced the referee to stop the bout.