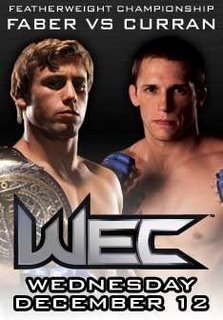 In the biggest WEC event yet for the growing promotion, WEC 31 featured three title fights in the Light Heavyweight, Middleweight, and Featherweight divisions, respectively. Doug Marshall defended his Light Heavyweight Championship with a first-round Armbar of Ariel Gandulla, Paulo Filho defended his Middleweight Championship with a second-round, come-from-behind Armbar of Chael Sonnen, and Urijah Faber, the most bankable star in the promotion, earned the biggest win to date in his career with a second-round Guillotine Choke of Jeff Curran.

Former UFC Lightweight Champion Jens Pulver made his promotional debut on the card, submitting Cub Swanson with an Anaconda Choke in the first round. This would be the only victory of Pulver’s WEC career.