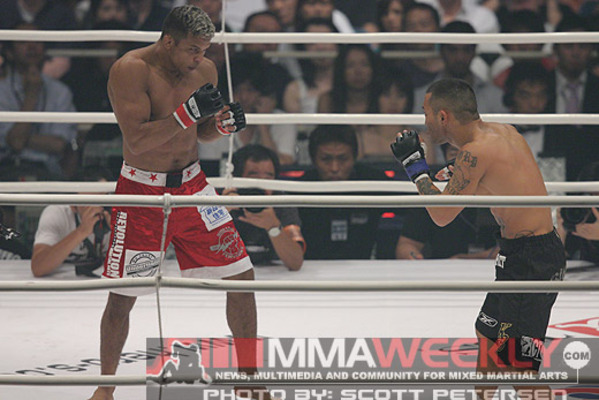 Bibiano Fernandes is ineligible for regional rankings due to inactivity.
Fighters must have at least one completed MMA bout in the past two years to be ranked.

After kicking off his professional fighting career in 2004 with a win, Fernandes returned two years later and suffered back-to-back losses to the two best featherweights in the world at the time in Urijah Faber and Norifumi "KID" Yamamoto. Following these losses, Fernandes returned with a vengeance in 2008 and finally put his BJJ black belt to use when he won seven straight fights, including the DREAM Featherweight Grand Prix, defeating the likes of Joe Warren and Hiroyuki Takaya in the process. While he is still developing on his feet,  Fernandes is one of the best functional submission artists in the featherweight division.

After losing his featherweight title in a rematch with Takaya at Dynamite!! 2010, Fernandes elected to drop down to the bantamweight division as he entered in the DREAM bantamweight tournament.  The move proved to be rewarding as Fernandes ran through the tournament winning the championships with wins over Takafumi Otsuka and Rodolfo Marques while getting his first career TKO over Antonio Banuelos in the final bout.

In June 2012 Fernandes was briefly rumored to have signed with the UFC where he was expected to do battle against Roland Delorme, however it was later revealed that he had never signed with them and that he had signed with Asian organization ONE FC instead where he made his debut on August 31, 2012 where he defeated fellow Brazilian Gustavo Falciroli by unanimous decision. Bibiano went on to defeat Yoshiro Maeda at DREAM 18 via submission in the first round. He next fought Koetsu Okazaki at ONE FC 9 for the ONE FC Interim- Bantamweight Championship, defeating Okazaki via unanimous decision after 5 rounds.