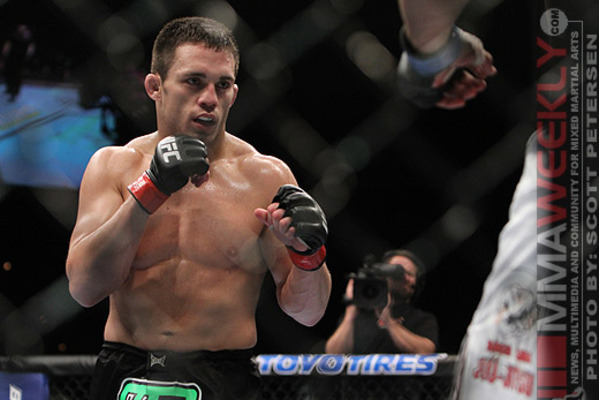 Jake Ellenberger is ineligible for regional rankings due to inactivity.
Fighters must have at least one completed MMA bout in the past two years to be ranked.

One of the most aggressive and confident prospects in the UFC’s welterweight division, Jake Ellenberger made his MMA debut in 2005 and has since kept up a busy schedule, fighting over five times per year on average. Since turning professional, Ellenberger has only been finished in one fight and has earned wins over respected veterans such as Jose Landi-Jons, Pat Healy, and Mike Pyle. In his UFC debut in 2009, Ellenberger fought the last reigning WEC Welterweight Champion Carlos Condit to a close Split Decision loss in a fight that many feel should have gone his way, stunning and almost finishing Condit in the first stanza.

Since his loss to Condit, Elllenberger went on a tear defeating Mike Pyle, John Howard, Sean Pierson and Jake Shields by TKO as well as decision victories over Carlos Eduardo Rocha and Diego Sanchez. This impressive streak helped move him up the rankings and set up a match with Martin Kampmann. Elleneberger was favored to win this bout and looked like he was on his way to do that until Kampmann turned things around and finished him by TKO in the 2nd round. Ellenberger would then get a chance to avenge a loss against Jay Hieron earlier in his career. He would take the Unanimous Decision victory at UFC on FX 5.

An aggressive wrestler with an iron jaw and knockout power, Ellenberger has proven to be a tough outing for anyone competing at 170, and as young as he is, has a ton of upside. He would prove that in his next fight welcoming Nate Marquardt back to the UFC at UFC 158. He would finish Marquardt with punches in the first round bumping him up the welterweight ladder as well as earning Knockout of the Night honors.

Ellenberger would look to move a step closer to a title shot when he faced off against Rory MacDonald at UFC on FOX 8. However Ellenberger didn't have an answer for Rory's reach and jab and he lost a Unanimous Decision.

He made his next octagon appearance against 'Ruthless' Robbie Lawler, He lost the fight in the 3rd round via TKO with 2 minutes left in the fight. Jake Ellenberger was matched up with hot prospect and TUF winner Kelvin Gastelum for his next fight at UFC 180 he fought hard with the younger Gastelum showcasing good boxing but ultimately ended up getting caught with a tight RNC in a scramble near the end of the first round losing by submission, this would mark the first time 'Juggernaut' lost 3 consecutive fights in his career. He would bounce back with a Performance of the Night submission over Josh Koscheck in the second round at UFC 184.