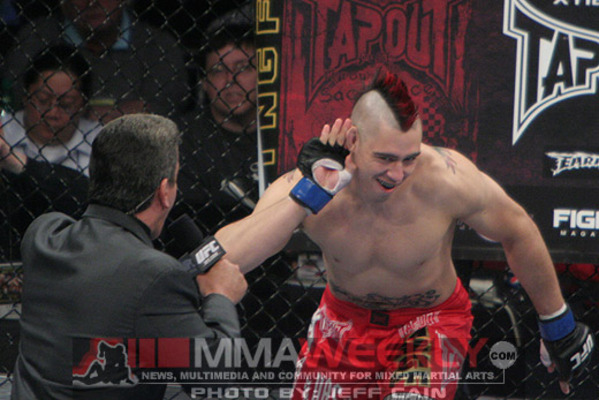 Dan Hardy is ineligible for regional rankings due to inactivity.
Fighters must have at least one completed MMA bout in the past two years to be ranked.

Dan Hardy snuck up on the MMA world. Easily the most recognizable member of the growing Team Rough House gym in Nottingham, England, “The Outlaw” rose from relative obscurity only a few years ago to one of the most familiar ‘love him or hate him’ faces in the welterweight division.

Though he can be flashy in his appearance and tremendously cocky before a fight, Hardy is no fake. Known for his highly technical striking skills and knockout power, Hardy compiled a solid professional record before debuting for the UFC in 2008. After winning his UFC debut against Akihiro Gono, Hardy knocked out Rory Markham in the first round.

Hardy then deliberately instigated a memorable war of words with welterweight standout Marcus Davis before their fight in June of 2009, turning an otherwise run-of-the-mill affair into a cross-Atlantic rivalry and one of the most anticipated contests of the year. Hardy won that tilt by Split Decision, doing a number on Davis’s face in the process. Afterwards, Hardy credited his pre-fight psyche tactics with giving him an edge in the bout. Hardy's combination of bombast and skill in the Davis fight earned him a spot in a number one contender’s match with Mike Swick. Hardy seized his shot at the title by defeating Swick with technical boxing and well-timed hooks en route to a Unanimous Decision verdict.

Welterweight Champion Georges St-Pierre, though, once again showed he was the class of the division, dominating Hardy in their March 2010 title affair. Although he was soundly outwrestled and nearly submitted on several occasions in that title fight, Hardy gained more fans than detractors with a gutsy performance, as well as an unexpected streak of humility before and after the bout.

Aware of Hardy's growing star power within his native England, the UFC next booked the mohawked competitor as the co-main event of their UFC 120 event in London against Carlos Condit. Hardy and Condit went toe-to-toe in over four minutes of memorable action until Condit knocked Hardy to the mat with a left hook just before Hardy connected with one of his own. Despite the knockout loss, Hardy's hometown fans remained firmly behind him during post-fight interviews.

Hardy has cleverly made himself a bankable commodity in the welterweight division with his unique look, exciting fighting style, brash persona, and knack for selling fights. Unfortunately, the loss to champ GSP marked the beginning of the worst losing streak of his professional career, as he has lost four fights in a row since earning the title shot. In a fight that could have been his last if he lost Hardy faced off against Duane Ludwig. He would punch his ticket to stay in the UFC with a 1st round KO over Ludwig for the Knockout of the Night. He would follow up with a Unanimous Decision over Amir Sadollah getting his career back on the winning path.

Hardy is now effectively retired from MMA after being diagnosed with Wolf-Parkinson-White-Syndrome. Because he has never had any symptoms from the abnormality, he was unaware of his "wolf's heart" until being tested in the state of California, one of the few states which test for his type of abnormality.

In February 2014, it was announced that Dan Hardy would be a UFC Fight Night commentator. His first event being UFC Fight Night 37: Gustafsson vs. Manuwa. Currently Hardy is focusing on building his knowledge of other UFC weight divisions and learner more about fighters outside of his old weight class to better himself at his current occupation. Hardy has even said he is "looking to get to the level of Joe Rogan in a couple of years".

When Hardy isn't in the octagon or commentating he spends a lot of his time travelling to and from Las Vegas and England, sketching, and being involved in minor details with certain bands in the punk, hardcore and metal music scene. Hardy has even recorded a song with punk-rock band Cock Sparrer and used it as his entrance music.

Watch this video interview with Dan Hardy from Fight! Magazine.