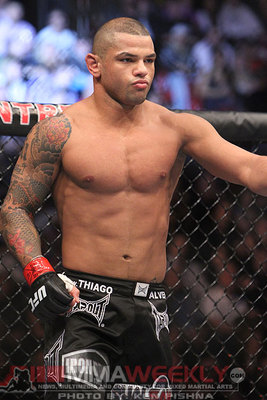 #76
Greatest MMA Striker of All Time

Thiago Alves is ineligible for regional rankings due to inactivity.
Fighters must have at least one completed MMA bout in the past two years to be ranked.

While he is a purple belt in Brazilian Jiu-Jitsu, Alves is predominantly known in the MMA world for his vicious Muay Thai striking game, and for extremely large weight cuts down to 170 that typically allow him a size and strength advantage over his opponents. Alves began training in Muay Thai at the age of 14, but only found a high level of professional success when he relocated to the United States at the age of 19 and began training full time at the famed American Top Team in Coconut Creek, Florida. Alves also possesses some of the most damaging leg kicks in the business.

Thiago's nickname has nothing to do with the fighting style. After his first fight in his career, Thiago was very hungry and started eating with the hand; attitude rendered joke that the fighter was eating "like a pitbull." He liked the nickname "powerful" and officially incorporated.

A modern-day wrecking ball at 170, Thiago Alves began training in MMA at a very young age and lost back-to-back fights to start off his mixed martial arts career in 2001. As he grew, however, Alves soon built a solid professional record and earned his way into the world’s largest mixed martial arts organization, the UFC, defeating notable welterweight "The Irish Hand Grenade" Marcus Davis along the way.

Although he lost his first UFC bout to future lightweight standout Spencer "The King" Fisher by triangle choke in October of 2005, Alves reeled off back-to-back wins over Ansar Chalangov and Derrick "The Eraser" Noble before running into the second roadblock of his UFC career in Jon Fitch, whom he lost to by TKO in round 2.   Alves then put together the most impressive winning streak of his career, winning seven straight contests, defeating Josh "Kos" Koscheck and John "The Natural" Alessio by decision and finishing Tony "The Peruvian Savage" DeSouza, Kuniyoshi Hironaka, Chris "Lights Out" Lytle, Karo "The Heat" Parisyan, and former UFC Welterweight Champion Matt Hughes with strikes in the process. That streak, dotted with bonecrushing KOs, put him on the map and into the minds of the UFC fanbase.

In July of 2009 at UFC 100, a peaking Alves fought defending champion Georges "Rush" St. Pierre over five rounds, losing on all three judges’ cards in a spirited performance in which he was controlled by the champion's wrestling. The loss did little to diminish Alves’s reputation as a game and still up-and-coming fighter.

Alves was scheduled to face Jon Fitch at UFC 107 in a rematch of their bout at UFC Ultimate FN 5.  However Alves suffered a knee injury, forcing him to withdraw from the fight.  Alves was then scheduled to face Fitch on March 27, 2010 at UFC 111: St.Pierre vs. Hardy.   However, on March 25, Alves was taken off the card due to the discovery of an arteriovenous malformation in the brain from a pre fight CAT scan.   Alves had the corrective surgery on March 31, 2010 at Roosevelt Hospital in New York.   He took leave of absence, staying in New Jersey with his wife, Melissa and was expected to fight again during the summer of 2010.

The Alves/Fitch rematch eventually took place at UFC 117: Silva vs Sonnen.   This fight was confirmed to be the number one contendership for the welterweight championship (to fight the winner of the St-Pierre/Koscheck bout).   Alves again failed to make weight.  Alves would go on to lose to Fitch via unanimous decision.

Alves faced John "Doomsday" Howard on December 11, 2010 at UFC 124: St. Pierre vs. Koscheck 2.  Alves won by a dominant unanimous decision in one of his best performances in the UFC.

Following the victory over Howard, Alves lost to Rick "The Horror" Story on May 28, 2011 at UFC 130: Rampage vs Hamill via unanimous decision.  Alves faced promotional newcomer Papy "Makambo" Abedi at UFC 138: Leben vs. Munoz on November 5th, 2011.   Displaying improved ground control, Alves defeated Abedi via submission (rear naked choke) at 3:32 of round 1 to secure his first submission victory in the UFC (and first submission victory in his MMA career that wasn't due to strikes). Alves then faced Martin "Hitman" Kampmann on March 3, 2012 at UFC on FX 2: Alves vs. Kampmann.  After avoiding takedowns and outstriking Kampmann for the majority of the fight, Alves was submitted in the final minute of the bout after being caught in a guillotine while trying to secure a takedown.

After a prolonged 2 year absense from the octagon due to various injuries, Alves would face Seth "Polish Pistola" Baczynski on April 19, 2014 at UFC on Fox 11. He would pick up the unanimous decision victory. He would follow that up with another win over Jordan Mein at UFC 183. Alves was losing the fight before he turned it around and was able to TKO Mein in the second round earning the win and a Performance of the Night bonus.