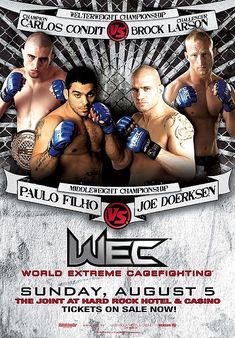 While Featherweight Champion Urijah Faber was undoubtedly the WEC’s most popular and top-drawing fighter, Welterweight Champion Carlos Condit began closing in on him with a successful title defense of his own against the bigger, stronger Brock Larson in the main event of WEC 29.

Also on the card, undefeated Brazilian phenom Paulo Filho made his U.S. debut and took the Vacant WEC Middleweight Championship by defeating Canadian veteran Joe Doerksen in the first round.