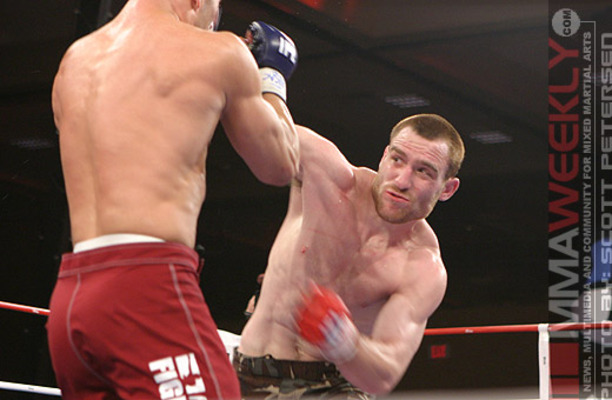 Pat Healy is ineligible for regional rankings due to inactivity.
Fighters must have at least one completed MMA bout in the past two years to be ranked.

Pat Healy is an American lightweight fighter currently signed to Strikeforce. He has previously fought for the IFL, MFC, KOTC, WEC and the UFC. He has fought a number of high level fighters throughout his lengthy career and holds wins over Dan Hardy, Paul Daley, Tiki Ghosn, Carlos Condit, Ryan Ford and Eric Wisely. He is a former MFC Welterweight champion. Of Pat's twenty-eight wins, fifteen have been by submission. He currently trains out of Team Quest alongside his twin brother, Ryan Healy.

After a shaky start to his career in 2001 that saw him go 7-7 in regional promotions, he was given an opportunity to showcase his skills when he was picked up by WEC in 2005. Pat would lose his debut with the company to Chris Lytle by split decision. After another seven regional fights, he was again given a shot by WEC, this time, he would gain a TKO victory over Tiki Ghosn. After picking up three more wins, he was given his sole opportunity in th UFC. Healy would end up losing to Anthony Torres by submission in the first round and would be released from the company.

In 2007, Pat's career would be given new life. He was signed with the now defunct IFL and would go 2-2 with both of his losses coming to future UFC fighters, Rory Markham and Jake Ellenberger. He was next given a title shot in MFC in which he would defeat then champion, Ryan Ford, by submission. He would defend his title only once, again against Ryan Ford, this time winning by split decision. He would again go back to the regional circuit, compiling a 2-1 record, with his loss coming to TJ Waldburger.

In 2010, Healy would be signed to Strikeforce. After winning his promotional debut, he would lose to former lightweight champion, Josh Thompson. He would rebound, however, and went on to win his next five fights, with three decisions and two submission victories. He was set to fight undefeated promotional debuter, Kurt Holobaugh, at Strikeforce's final event. Although Holobaugh made the fight much closer than many expected, Healy was able to dominate much of the fight on the ground and pick up the decision victory and a spot on the UFC Roster.

Healy would face a tough test for his UFC fight when he was scheduled to fight Jim Miller at UFC 159. Healy was able to pull off the upset when he submitted Jim Miller in the third round by rear naked choke, it was only the second time Miller had been submitted in his career. Healy would also earn Fight of the Night and Submission of the Night in an impressive UFC debut. However following the win it was revealed that Healy failed his post fight drug test for Marijuana and was suspended for 90 days with the fight becoming a no contest. And on top of that he also had to give back the $130k in bonuses that he won for the fight.

The failed drug test would prove to be the least of Healy's worries as since then he has not been able to win a fight he has lost 4 unanimous decisions in a row to: Khabib Nurmagomedov, Bobby Green, Jorge Masvidal, and most recently Gleison Tibau at UFN 45: Cerrone vs Miller on July 16th, 2014. He has yet to compete since dropping 4 in a row.