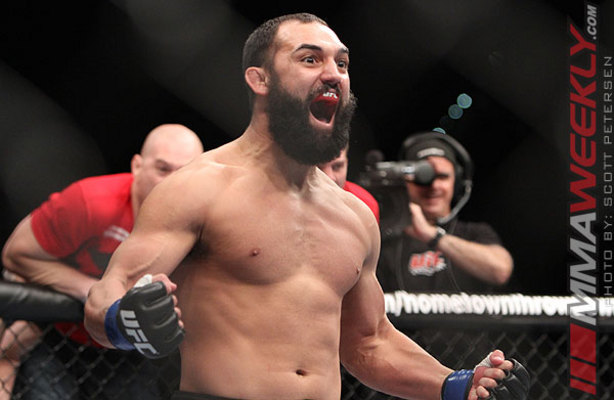 Johny Hendricks is ineligible for regional rankings due to inactivity.
Fighters must have at least one completed MMA bout in the past two years to be ranked.

Once a highly touted Up-and-coming prospect and now a top 10 welterweight, Johny Hendricks is one of the best collegiate wrestlers to enter the world of professional fighting in years. During his amateur career with Oklahoma State University, Hendricks won the 2005 and 2006 NCAA Division I Championship at 165 lbs., and earned All-American honors four times along with three Big 12 Conference championships.

Following his collegiate wrestling career, Hendricks made the move to MMA, winning two fights in the WEC before the welterweight division was dissolved and Hendricks was folded into the more competitive UFC welterweight division. In his first fight with the UFC, Hendricks upset TUF 7 winner Amir Sadollah with a first-round TKO victory in just 29 seconds, following that up with back-to-back wins over Ricardo Funch and TJ Grant.  Hendricks, however, would suffer the first defeat of his career at The Ultimate Fighter 12 Finale to fellow wrestler Rick Story.

Big Rig took the loss seriously and would put together a two fight win streak that earned him a fight with top 5 ranked welterweight Jon Fitch.  Hendricks dealt Fitch a KO loss in the 1st round, the first loss Fitch had suffered since his title fight with GSP four years prior. The knockout would also earn Hendricks the Knockout of the Night bonus. Hendricks followed that win up with a decision win over another top 5 welterweight in Josh Koscheck.  His latest win not only has given Big Rig a four fight win streak (the last two over top ranked WW's), but has also earned him a number one contender match up with fellow brawler, Martin Kampmann.  The two were scheduled to square off at UFC 154, with the winner potentially garnering a much coveted title shot. During the night's co main event, Hendricks came out victorious with a first round KO of the recently streaking Kampmann.

Hendricks still relies on his wrestling base to get him through fights that are not going his way. But he also has solid power in his punches and says that he prefers to stand and strike with opponents rather than taking them to the ground. His extraordinary wrestling base suggests he might follow a trail in his physical development much like another Welterweight standout, Josh Koscheck, and add increasingly potent striking and submission skills.

Johny would face off against Carlos Condit at UFC 158 in a #1 contender's match to face the winner of the GSP vs. Diaz match up. Johny would defeat Condit by Unanimous Decision in the Fight of the Night and should now finally be in line to get the title shot he has been waiting for. Hendricks fought welterweight kingpin Georges St. Pierre at UFC 167 for the welterweight title.  In what was one of the most exciting and controversial fights of the year, Hendricks would lose a split decision.

Nearly a month after his losing effort at capturing the welterweight title, GSP announced that he would vacate the title.  This would set up Hendricks vs. Robbie Lawler as the Main event in Dallas at UFC 171. After a back and forth fight that was pretty even Hendricks was able to take control in the fifth round and pick up the decision. Alongside winning the welterweight title Hendricks would also get the bonus for Fight of the Night.

After nearly a nine month layoff due to injuries (torn right bicep) that he sustain at UFC 171, Johny Hendricks returned to the octagon at UFC 181 to defend his title in a rematch against Robbie Lawler. Johny was defeated via split decision. At the UFC 181 post-fight press conference, Johny stated he had slowed his pace due to him believing he had won three of the five necessary rounds. Robbie's activity while Johny was pursuing failed takedowns turned out to be the deciding factor. As stated at the post fight press conference it was unclear whether Johny would receive a title shot for the rubber match against Lawler, or if he had to fight again prior to doing so.

He would step in the octagon against Matt Brown next at UFC 185 and would get back in the win column picking up the unanimous decision victory.

After beating Brown, Hendricks was scheduled to fight Tyron Woodley at UFC 192.  However, the fight was cancelled after Hendricks needed to be rushed to the emergency room after suffering an intestinal blockage and kidney stone while weight cutting for the fight.