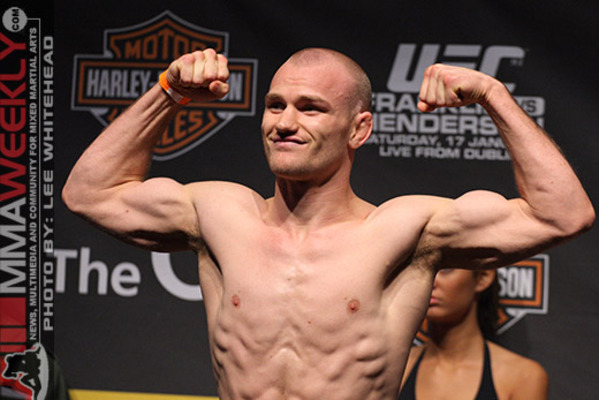 Martin Kampmann is ineligible for regional rankings due to inactivity.
Fighters must have at least one completed MMA bout in the past two years to be ranked.

After running his professional record to 10-1 without a single opponent making it the distance, Martin Kampmann had tremendous momentum heading into his UFC debut against Thales Leites in 2006. After defeating Leites by unanimous decision, Kampmann went on to submit respected middleweights Drew McFedries and Jorge Rivera before losing his first UFC bout to Nate Marquardt at UFC 88 in 2008. Following the loss, Kampmann moved down in weight to his more natural weight class of 170 lbs., winning back-to-back contests with Alexandre Barros and former WEC Welterweight Champion Carlos Condit before losing in the first round via TKO to British striker Paul Daley. Kampmann rebounded nicely with a dominant win over Paulo Thiago, controlling Thiago in ways no other UFC fighter so far had done.

Known for his aggressive striking style and underrated submission skill set, Martin Kampmann is one of the most respected welterweights in the UFC, appearing regularly on top ten welterweight rankings. While the earlier part of his career was spent knocking out inferior strikers, Kampmann has been forced to round out his game as he faces equally if not more deadly knockout artists in the sport’s top echelons, a development which could pay dividends for Kampmann for years to come.

Kampmann lost two very controversial decisions in a row to Jake Shields and Diego Sanchez before his current three fight win streak. He would win a unanimous decision over Rick Story before impressing fans with a come from behind victory over Thiago Alves. Kampmann was clearly losing the fight when Alves shot for a takedown and Kampmann was able to lock in a guillotine choke for the Submission of the Night. He would follow this win up with a win over top contender Jake Ellenberger finishing him by TKO in the 2nd round earning another award for Knockout of the Night.

Kampmann would then face Johny Hendricks and look to become one step closer to a title shot. On November 17th, 2012, Kampmann was knocked out in the first round by Hendricks in their co main event bout at UFC 154. The loss put an end to a three fight winning streak dating back to November 2011. Kampmann's next fight would be a rematch against Carlos Condit in the main event at UFC Fight Night 27. Kampmann came out strong in the first round trying to turn the fight into a grappling match and getting takedowns winning the first round. However Condit would take over after that and would end up finishing Kampmann in the fourth round. He would however earn Fight of the Night honors for his effort.