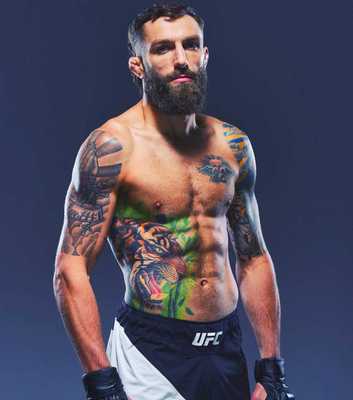 Fighting for a major organization has made Michael Chiesa ineligible for regional rankings.

Mike Chiesa is a lightweight fighter currently signed to the UFC. He holds a purple belt in Brazillian Jui Jitsu and trains out of Team Alpha Male. He won The Ultimate Fighter: Live. Of his nine wins, seven have come by submission. He has won the "Submission of the Night" bonus two times.

Chiesa started his MMA career in 2008 winning seven fights in a row and finishing five of them by submission. Chiesa was selected for the first live season of The Ultimate Fighter. He defeated Johnavan Vistante by submission to earn his spot in the house as well as a $5,000 bonus. He would win his first fight in the house defeating Jeremy Larsen by Unanimous Decision. Shortly after his win, Chiesa was informed that his terminally ill father had passed away and he was allowed to leave the house to attend the funeral. In his quarterfinal matchup, he was set to face kickboxing prodigy Justin Lawrence. After a close fought two rounds it went to sudden death where Chiesa was able to get on top of Lawrence and punch his ticket to the semifinals and another $5,000 bonus. He defeated James Vick in the semi's by 1st round TKO to secure his spot in The Ultimate Fighter 15 Finale. Chiesa was the underdog in this final matchup, facing off against Al Iaquinta. Chiesa was able to pull off the upset with a 1st round choke, winning the 15th season of The Ultimate Fighter as well as a Submission of the Night bonus.

Chiesa would continue his win streak and submission streak with his 6th straight submission victory with a win over Anton Kuivanen at UFC 157. He was next set to fight Reza Madadi at UFC on Fox 8, but visa issues forced Madadi off the card and Jorge Masvidal stepped in on short notice and handed Mike his first loss when he was submitted by a D'arce choke with only one second left in the second round. He was next set to fight fellow TUF winner, Colton Smith, at UFC: Fight for the Troops 3. Despite nearly being finished, Chiesa was able to secure a rear naked choke after Smith was stunned by a takedown to secure the submission win. He was awarded another "Submission of the Night" bonus for this performance.

He would win his next bout when he picked up a decision over Francisco Trinaldo. However he would lose his next bout in a Fight of the Night performance to Joe Lauzon. The fight was stopped due to a cut which Chiesa was not happy with but it was a pretty deep gash.

Episode 1 Chiesa def. Johnavan Vistante by Rear Naked Choke at 2:05 of Round 1

The Ultimate Fighter 15 Finale Chiesa def. Al Iaquinta by Rear Naked Choke at 2:47 of Round 1