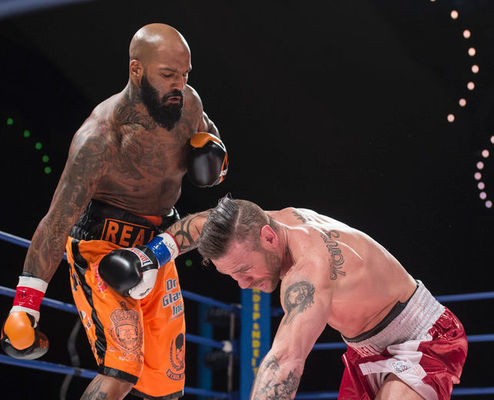 Ryan Ford is ineligible for regional rankings due to inactivity.
Fighters must have at least one completed MMA bout in the past two years to be ranked.

Ryan Ford (born March 8, 1982) is a Canadian mixed martial artist and boxer. A professional competitor since 2007, Ford has competed for WSOF, Bellator, the MFC, TFC, and the AFC.

Ford has twice left the Edmonton-based MFC organization due to contract disputes.

On May 19, 2011, Ford fought UFC veteran Karo Parisyan at MMA Live 1 in London, Ontario, After the first two rounds, Ford caught Parisyan with a knee and cut his forehead, causing the doctor and referee to stop the fight giving Ford the win via doctor stoppage.

On June 10, 2011, Ford Returned to the Aggression MMA organization at AMMA 7: Confrontation defeating Nick Hinchcliffe in the third round via TKO due to punches. On September 16, 2011, at AMMA 8: Unfinished Business, Ford was defeated by David Hulett via guillotine choke in the first round. On February 11, 2012, Ford defeated Ricky Goodall at AMMA 9 via TKO due to elbows in round one. On March 23, 2013, Ford fought for the renamed Aggression Fighting Championship promotion in Edmonton, Alberta. Ford defeated Brendan Tierney via KO in the second round at AFC 17.

Bellator Fighting Championships
Ford signed with Bellator making his debut On May 4, 2012 at Bellator 67. Ford defeated Luis Santos via TKO due to knees and punches in the second round.

World Series of Fighting
On December 5, 2013, it was announced that Ford signed a multi-fight deal with World Series of Fighting’s Canadian branch. Ford made his WSOF debut at WSOF Canada 1 against Joel Powell for the inaugural WSOF Canadian Welterweight Championship. Ford won via knockout due to a front kick and punches in just 53 seconds of round one to win the WSOF Canadian Welterweight Championship.

Ford was scheduled to fight Bristol Marunde on June 7, 2014 at WSOF Canada 2. He pulled out after getting injured during training.
Ford faced Jake Shields in a non-title bout in the main event at WSOF 14 on October 11, 2014 in Edmonton, Alberta Canada. Although he dropped Shields early in the fight with a left hand, Ford eventually lost the fight via rear naked choke in the first round.