Anderson Silva defeats Yushin Okami via KO/TKO at 2:04 of Round 2 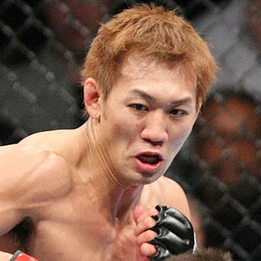 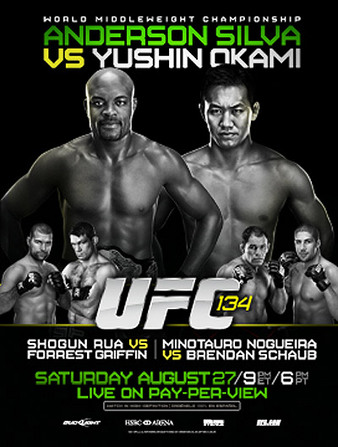 The main event of UFC 134 featured a rematch between Yushin "Thunder" Okami and UFC champion Anderson "The Spider" Silva. Silva had lost to Okami by disqualification due to an illegal upkick in a fight prior to joining the UFC. Since then, Okami had gone an impressive 10-2 in his UFC career, while Silva became one of the most successful fighters in UFC history, going undefeated at 13-0 in the organization.

Silva came out circling quickly to his left, landing a low kick and then pawing his left hand at Okami. Okami briefly got his hands around Silva, who in turn attempted to get Okami into a thai clinch until they separated uneventfully. Silva opened up with a big left hook that missed its mark. Okami pressed Silva against the fence where Silva quickly maneuvered into a thai clinch and threw a knee. Okami delivered some uppercuts and punches to the body. Silva landed another good knee and Okami dropped down looking for a takedown unsuccessfully. Breaking free, Silva landed a pair of right hands to the chin and began confidently tracing his hands around the air. Silva threw and landed a high kick to close out the round.

Silva tagged Okami with another right hand, Okami connected on a counter, and Silva intensely got in Okami's face. A straight right knocked Okami down after having his hands held low. Silva opted not to get into Okami's guard, kicking the legs once and allowing his opponent to stand back to his feet. Another lightning right connected, followed by a left that hit Okami on the temple, dropping him again to the mat. Silva this time pounced on top, swinging away on the challenger who could do nothing but cover up. A knee to the body and a series of additional punches and referee Herb Dean had finally seen enough.

The official end came at 2:04 of the second round for the winner by TKO, Anderson Silva. Speaking to Kenny Florian in the post-fight interview, Silva commented, "I'm training, I'm training for all of my team... I train hard for the best guys in the world, Cigano punches my face all the time!"

Finished my last training.I'd like to say tks to everybody to support, I know that I have a big challenger and I will do my best,thanks Ooos

And I want to thank you, not only brazilians, but everybody around the world, for your support